Scholarship program will add to ties between Waynesboro, Wanzhou 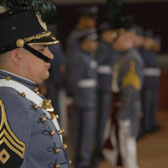 One way to keep the growing United States-China global competition from descending into 20th century-style Cold War is to push cultural and economic connections – the likes of which are being forged between Waynesboro and its sister city Wanzhou, China, a bustling industrial city on the Yangtze River with a population of 1.7 million.

Adding to the list of connections already in the works is a scholarship being set up at Fishburne Military School that will bring two Wanzhou students to Waynesboro each year.

FMS Superintendent Col. Rick Zinser sees the scholarships being a “win-win” for Fishburne, the city and Wanzhou.

“If you can get a couple of kids from there whose parents are in the government and business arena there, and they come here and eventually go back home Fishburne graduates, they’re going to be invested in this community. This only helps the two communities grow closer together,” Zinser said.

The scholarships will bring two students to Waynesboro from Wanzhou beginning this fall. The idea to initiate the scholarship program came up during City Councilman Mike Harris’ visit to Wanzhou in November to continue discussions between city leaders and Wanzhou officials regarding deepening economic ties that include talks about a Chinese automaker using Waynesboro for assembly and shipment and Waynesboro serving as a conduit for the sale of Virginia agricultural products in the Wanzhou region.

Zinser hopes that the investment by Fishburne will in turn encourage additional interest in the school in Wangzhou.

“Of course I’m being a little selfish here. I’m hoping this will be priming the pump. These kids go back, talk to their dads, who talk to other dads, and all of the sudden, we’ve got 10 kids from China here,” Zinser said.

“It’s a really good investment for Fishburne and for Waynesboro,” Zinser said. “You get a couple of really super kids here on campus. I’ve had good experiences with students from China here and up at Massanutten. These kids will come in speaking English as well as any of your native-English-speaking students. They’ll work hard, they’ll be disciplined. And it adds to the experiences of our other students here. It’s a real win-win for everybody involved.”