Scholarship honors the legacy of Terry Arthur’s dedication to students 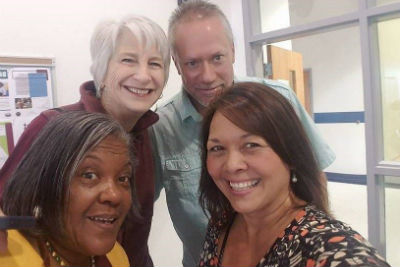 “Terry Arthur was one of those women you meet that you really admire and one day hope to be like,” said Melanie Trammell-Wenger ’19, in a tribute to her undergraduate academic advisor upon her passing in April of this year.

Arthur played a pivotal mentoring role for the alumna’s undergraduate years studying computer science at Virginia Tech, making sure she knew the “official” names of every course a computer science major should take.

“She never missed a single detail, and in my freshmen year she caught an error in planning on my part which would have delayed when I could declare my major as computer science,” said Trammell-Wenger. “I was forever grateful to her.”

From 1999 to 2016, Arthur served in the role of academic advisor for the Department of Computer Science in the College of Engineering. She was known to often come out of her office in McBryde Hall to meet the students in the hallway and student lounge, as well as to attend their presentations.

To continue Arthur’s legacy of always being there for her students, her husband, James “Sean” Arthur, emeritus professor of computer science, established the Terry A. Arthur Scholarship this fall. The duo overlapped working in the department, with Sean enjoying a 30-year tenure. “She had such an impact on students that I wanted her memory and contributions to live on,” he said. “She just loved Virginia Tech and her students.”

“When she would advise her students, she knew the difficult courses and the instructor who taught them,” said Sean Arthur. He joked that she would even tell the students to steer away from his courses at times.

Having worked throughout her teenage years, Terry Arthur understood the reality of being on a budget and working to help put herself through college. “Terry had a special affinity for students who were facing similar circumstances,” Sean Arthur said. “She was always there to solve those challenges.”

It was also important to Sean Arthur to make the academic expectations realistic by setting a minimum GPA of 2.8, providing more opportunities for students to qualify for the scholarship and retain it over the course of the four years.

“She was the most patient person I’ve ever known and could have a conversation with anyone,” said Libby Bradford, former director of undergraduate studies for the department. The two started in the department close to the same time and worked together for more than 16 years.

“She was able to talk to any student, regardless of their situation, attitude, or academic background, and help them figure out a plan,” said Bradford. “Terry always asked students ‘How can I help?’ when they came to see her. That was her motto in life, as she was always doing things to help others.”

There was no denying the affection Terry Arthur held for her students in wanting them to succeed. Some of her most treasured days were when alumni came to visit. “She so loved seeing them grow up, move out into the real world, and start their careers and families,” said Bradford.

“You could not help but feel at ease with Terry,” said Linda Fitzgerald, who worked with Terry Arthur in the advising office from 2014 to 2016. “She was so genuine, she made you feel important, that your ideas and presence were valuable, and that you were loved.”

Bradford said Terry Arthur would often lose sleep to ensure she had made the best recommendation for her students and helped in the best way possible. Because she wanted her students to be prepared for their interviews, she coordinated an etiquette dinner in a formal setting for the students to interact with faculty.

It was during these dinners that Bradford and Terry enjoyed many interactions, including doing ‘quality tests’ on the cookies, with a special weakness for shortbread. “She was one of those people who would start a funny story and start laughing so hard, she couldn’t finish the story,” said Bradford.

“I think having Terry in our department gave many female students hope and inspiration that it was possible,” Trammell-Wenger said of her former academic advisor. “Whenever I would meet with her to check on my progression towards graduation, I knew I was in good hands.”

You can read more tributes to Terry Arthur from alumni, faculty, staff, and colleagues. Donations to the Terry Arthur Scholarship fund can be made online directly to a dedicated giving page.