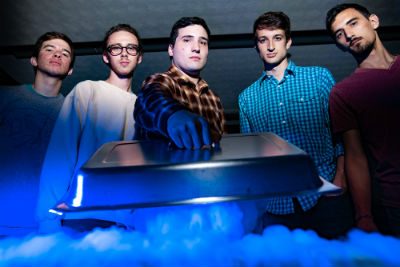 Left to right: Silas Clymer, Kaleb Branner, Robbie Chaplin, Andry Stutzman and Perry Blosser are competitors in Eastern Mennonite University’s first Iron Composer competition on April 28. The “nerve-wracking” competition requires them to compose music incorporating a secret ingredient, which they won’t know before the contest begins. At the end of the day, a concert will feature their new works. (Photo by Andrew Strack)

But this spring’s first-ever Iron Composer competition at Eastern Mennonite University is less about proving who’s “best of the best” than it is a life lesson reflective of the demands a real-world career composer/arranger might face, said Professor Ryan Keebaugh: “Hey, I need a 30-second cue within an hour,” or “Hey, can you arrange something for this group really quick? Cause this is a problem.”

The competition for cash prizes begins at 8 a.m. on Saturday, April 28, and will culminate the same day in an evening concert in which professional musicians will perform the five contestants’ works before an audience and a panel of judges.

The concert is at 7 p.m. in Lehman Auditorium, and is free and open to the public.

For the contestants, Keebaugh said, the whole event is “kind of nerve-wracking, just showing up not knowing what you’re going to write for.” He knows, because he’s been a contestant before – in an international version of what’s to take place at EMU.

The contestants – and the contest

The five contestants at EMU – Perry Blosser, Kaleb Branner, Robbie Chaplin, Silas Clymer and Andry Stutzman – were selected from applications submitted by all 14 students in the university’s composition program.

At the start of the competition, the contestants will receive instructions specifying the ensemble for which they are composing and the secret ingredient – or ingredients – they must include. After five hours of composing time, each of the composers will have a brief afternoon rehearsal with the performing ensemble.

Then, in the evening, Keebaugh will emcee the concert, during which the judges – a nonmusician, two ensemble members and Eric Guinivan, the composer-in-residence at James Madison University – will provide live feedback.

That prospect is only a little intimidating.

“In its mystery,” said Blosser, a senior music interdisciplinary studies major with a Bible and religion minor from Harrisonburg, “music composition can be both the most beautiful thing in life and the most taxing. For this reason I both anticipate and fear spending five hours locked in a room with blank manuscript paper.”

“I am very curious,” Branner said about the secret ingredient and the performing ensemble unknown. But, the sophomore music composition major from Churchville, Virginia, added, “I’m mostly just excited.”

The competition is one that Chaplin, a sophomore music education major from Lexington, Virginia, expects will “push me and my writing style” – and he’s looking forward to hearing the resulting new compositions.

Stutzman has been composing music for as long as he can remember, as a Harrisonburg youngster whistling tunes he’d thought up and later in advanced music studies at Eastern Mennonite High School. Now a senior music education major, he enjoys the process of composing “sometimes as much as the final product,” he said. “So even though we only have a few hours to write these pieces, I’m sure it will be a great time.”

The winner will receive a cash prize and a commission to be premiered and performed by EMU’s Emulate Chamber Ensemble. The second- and third-place winners will also receive cash prizes.

But the real prize, Clymer said, “is that we get to have our pieces performed by professionals.” The first-year double major in math and computer science from Meridian, Mississippi, is minoring in Honors and music, and said that while he has composed music and “played around with ideas” throughout high school, his composition lessons with Keebaugh this year “really motivated me to compose more intentionally.”

The event is modeled on Keebaugh’s own 2015 experience as one of five finalists from among 3,000 global applicants for an Iron Composer competition in Berea, Ohio. That year, the secret ingredient was an assigned antique board game.

The year before, he said, it was a tree.

“You couldn’t break it or harm it, but you could shake it. They put mics on it,” he said.

Read about Keebaugh’s participation in the 2015 Iron Composer competition.