Sam Hauser: And the curse of outsized expectations 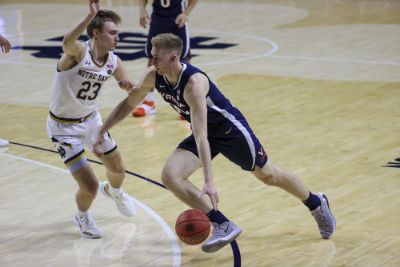 Sam Hauser had 13 points and 10 rebounds for Virginia in a 66-57 win at Notre Dame. Photo courtesy Atlantic Coast Conference.

Scott German and I, on our UVA-Notre Dame watchalong last night, kept giving Sam Hauser hell because of, well, it comes down to expectations.

His teammates said all last winter that Hauser, who had to sit out the 2019-2020 season after transferring from Marquette, would be an All-American this year, based on how he was eating them alive running the scout team.

Then the ACC media put Hauser on the preseason All-ACC first team.

That’s more an us thing than it is a him thing, obviously, but it also is what it is.

“Obviously, I’ve missed some open shots, and it’s frustrating, but you just got to stick with it and just shoot like the next one is going to go down,” Hauser said after (checks notes) he put up a double-double in UVA’s 66-57 win over Notre Dame.

Two threes in the final minutes – the first extending the lead from one to four, the second, with 1:40 to go, turning a five-point lead into an eight-point game.

He did all of this in 38 minutes, including going all 20 in the second half.

But there were warts.

His primary defensive assignment was Nate Laszewski, who torched the ‘Hoos for 28 points on 8-of-11 shooting.

The possession before the three at the 1:40 mark that put the game away, Hauser was out of position behind a screen, leaving the lane open for a Juwan Durham layup that got Hauser a gentle rebuke from teammate Jay Huff.

The talk last winter and then this fall in the preseason wasn’t about his defense, but obviously, what you do on defense is crucial when you’re playing for Tony Bennett.

“I think that’s an area where I definitely need to improve,” Hauser said. “I work at it every day. I think I’ve gained a lot of experience in this Pack Line in the last year and a half. I think I’ve gotten better and made the right strides to getting better. So, just got to stick with it in practice. I know coach will be on me for that. Ready for that challenge.”

The bigger challenge: walking on water.

It’s not fair, but that’s what we were promised, that he could do that.