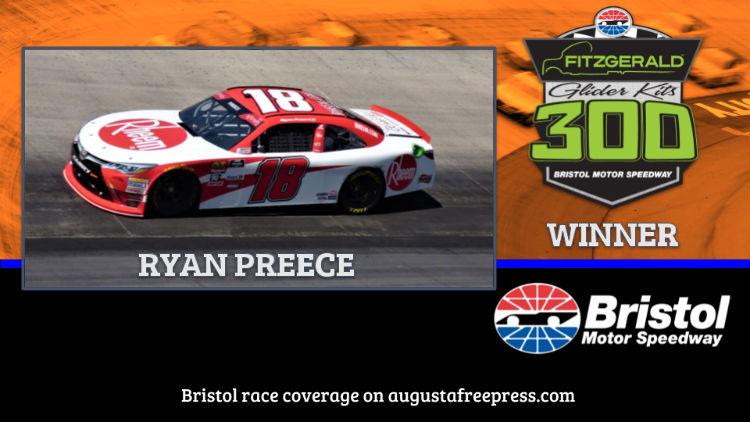 The excitement of closed quarter racing and tempers flaring has returned home to high banks of Bristol Motor Speedway and for veteran Elliott Sadler, it was as about as entertaining race as “we’ve had in a long time”.

“Tempers were flarin’, and people tearing up stuff, it was like the old Bristol”.

For race winner Ryan Preece, the old Bristol was a new experience for him as the 27 year old would battle all afternoon and come away with his second win of his career after passing Brandon Jones  with under 10 laps to go.

There were no Cup drivers in this week’s race and there will be no Cup drivers for the next four weeks. For Elliott Sadler it was a welcome break and a return to great racing for Bristol.

Race winner Ryan Preece gave praise to his team which he says is rarely recognized for their work and said it was a good win for him, monetarily.  Preece said he was going to enjoy the victory and the $100,000 payout in the Dash4Cash program sponsored by Xfinity.

After a clean start and before the completion of lap 1,  drivers Tyler Reddick, Kaz Garla, Jeremy Clements, Alex Labbe, Chase Briscoe, Christopher Bell, Joey Gase, Ty Majeski and Josh Williams  were collected in a incident on the front stretch to begin the race.

Clements would be the recipient of the worst end of the lap 1 incident as the driver of the #51 car would retire his Chevrolet Camaro to the pits and finish in last place.

Matt Tifft would bring out the fourth caution of Stage One for an incident in turn two.  The Tunity Chevrolet driver expressed his disappointment at the result saying that his car had a  “great chance” at making a solid run in the race before being collected in the lap 67 incident.

Christopher Bell would take the Stage One win but would get knocked out of the race in a Stage Two wreck involving the Joe Gibbs Racing Toyota and the Elliott Sadler Chevy Camaro and the #74 Horizon Transport Dodge of Cody Ware. Ryan Preece in the #18 Rheem Toyota would go on to take the Stage Two win holding off Daniel Hemric and a hard charging Justin Allgaier in the #7 Suave for Men Chevy Camaro.

Chase Briscoe, involved in an early accident on lap one in the #98 Ford Performance Ford would claw his way back to the lead at the start of Stage Three but would later bring out the 10th caution of the day with 112 laps to go for another wreck.

After contending for much of the late part of the race, John Hunter Nemechek had a tire going down and was forced to pit with 30 laps to go, taking him out of contention for the lead and the win.

With 23 laps to go, pole sitter Cole Custer hit the wall but did not bring out a caution and Brandon Jones fighting to hold the lead, catching lapped traffic with 18 to go before Shane Lee in the #3 Childress Vineyards Chevrolet would hit the wall and bring out the caution for another time with fifteen laps to go.

Jones would lose the lead after the restart as Jones opted for two tires instead of four and couldn’t hold on to the lead as Ryan Preece would make his move and lead the final laps for the victory and $100,000 dollar Xfinity Dash4Cash prize in the Fitzgerald Glider Kits 300.