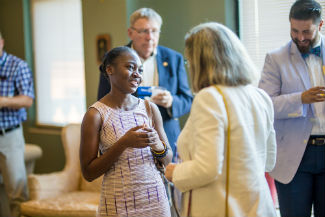 The new chapter of Rotaract, Rotary International’s college-campus iteration, joins more than 9,500 other clubs — with more than 291,000 members ages 18-30 in 177 countries — in “developing innovative solutions to the world’s most pressing challenges.”

At the EMU launch on Thursday, Sept. 28, club co-sponsor and EMU associate director of development Braydon Hoover said that the university and Rotary were “natural partners, as each of us is concerned with social justice, the well being of our communities both locally and abroad, and truly living into the Rotary motto, ‘Service above self.’” Hoover is a member of the Rotary Club of Harrisonburg.

An early goal will be to let other students know about the club and “how good it is to be with such wonderful people,” said student president Linda Ouedraogo. One emerging interest among the club’s first members is serving homeless people, she said.


Hoover described Ouedraogo as “one of the most tenacious and compassionate students I have ever met. She almost single-handedly brought Rotaract at EMU into being. All acclamation should go to this bright, up-and-coming, future community leader.”

Ouedraogo joined Rotaract in her home country of Burkina Faso after an older brother invited her to an annual three-days-long event during which free dental care was provided to more than 500 people in a rural community.

“I was only there for a day, but it was enough to impress and inspire me to get involved,” she said.

“I can’t wait to work with you all on these good things,” Ouedraogo said to those gathered for the launch, “not only for EMU, but for the Harrisonburg community, too. And hopefully someday we will hear that the Rotaract club of EMU did something great in the world.”

Present and past presidential support

In prepared remarks, EMU president Susan Schultz Huxman commended Rotarians for their work and welcomed the Rotaract presence on campus.

“More than ever,” she said, “our world, our nation, our state, our cities, and our campuses need Rotarians. We need Rotarians who believe that giving back to our communities and forming meaningful, lifelong friendships are two of the most simple and yet most profound ways that we unify, not divide, that we congregate, not segregate, that we help, and not harm, our social fabric here at home and around the globe. More than ever, we need Rotarians to help us aim high at what we can accomplish to serve our communities.”

President emeritus Myron Augsburger, too, lauded the addition at EMU. He first joined Rotary International in 1965, when, as the college’s new leader, he wanted contact with the wider community.

“Up to that point, the Mennonite community was pretty separate, so I needed contact with a broader area, and Rotary was a good way to engage that,” he said. “It’s very important for students as they are developing to move out, to associate with others. We need to be able to hear each other, or how in the world can we share what we have to offer?”

Also present was 30-year Rotarian Glen Kauffman, a 1982 graduate of EMU and a financial advisor at Everence. The first person he sponsored to join the Harrisonburg club was Hoover, also an EMU alumnus.

“I’m really impressed with what Rotary does both in our communities and around the world,” Kauffman said at the launch. “Peace is one of those key things, and that fits so well with what EMU does.”

Having a Rotaract club on campus, he said, will allow students to “develop leadership skills, do service projects, and to network with local business and professional persons — and hopefully get a taste of Rotary so that when they begin their careers, they will think that it would be a good place to make connections.”

JMU Rotaract sponsor Fulcher sees the club as a way for students to think beyond their campus borders and serve others.

“There’s this whole group of amazing students who just have the right passion and energy to do good,” he said. “What Rotaract does is provide channels for those students to take that passion and energy and actually make concrete differences locally in the community and internationally.”