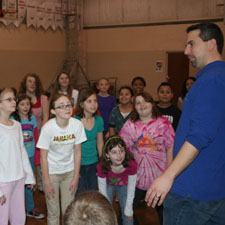 They were at the Waynesboro YMCA today because they’d already achieved – individually. The Y hosted 60 fourth- and fifth-grade students from William Perry Elementary who made the honor roll in the first semester of the 2010-2011 academic year.

The school’s first honor-roll party ended with a lesson the kids could take back to school and take home with them.

“It’s a bizarre feeling to have 60 people sitting on laps, and then the applause started happening. Was there a sense of accomplishment?” said YMCA executive director Jeff Fife after leading the group through a team-building exercise.

The students had to break through their comfort zone a bit to work together to form what Fife called “a group chair” – all 60 sitting on the knees of the person ahead of them at the same time.

It took three tries to get it down, but in the end they were able to do it.

“Two of you don’t participate, it doesn’t get done,” Fife told the group after the exercise, which culminated a busy day for the students at the Y, which included time in the pool and in the gym.

The day was conceived as a reward for the hard work the students put in to earn their way onto the honor roll.

“My hope is that we can balance internal and external motivations to encourage students to work hard and show them that their hard work can be rewarded,” William Perry principal Julie Zook said.