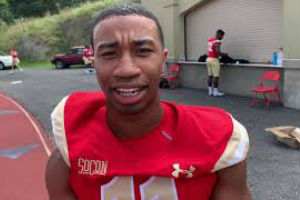 Riuq Trotman is back for a second go-round at a senior season at VMI after a whirlwind past several months.

The Virginia Beach native had his first senior season, in 2018, cut short by injury. Then came surgery, rehab, a stint in the transfer portal, in which Trotman explored options for using his medical redshirt to move up to FBS for his last season.

It all ended back where it started, with the three-year starter in the Keydets defensive backfield back with his ‘mates getting ready to do something special at VMI.

“Just seeing my guys out there, and spending time with them, I just knew that I couldn’t leave them,” Trotman said this week at media day at Foster Stadium.

Trotman said he has packed 24 pounds of muscle onto his frame since last season, and focused his training this spring and summer on speed and explosiveness.

The VMI defensive unit is looking to build on a 2018 season in which the young core of freshmen and sophomores got better as the season wore on.

“The offense is electrifying. Coach Sheppard (offensive coordinator Brian Sheppard) does a really good job with the guys. I expect them to put up 40 points, 50 points a game this year. With the defense, the mentality is just, changed, from last year. Before, it was, we think we can win. Now, we believe we can win, and we know we’re going to win,” Trotman said.

And, there you have it, why Trotman is back.

“I’ve laid a foundation here. I’ve been here with them through it all. It just didn’t feel right leaving,” Trotman said. “These are my guys. These are my boys. I just wanted to end my career the right way, and end it with these guys.”