Review: Something in the Water Festival dazzles Virginia Beach 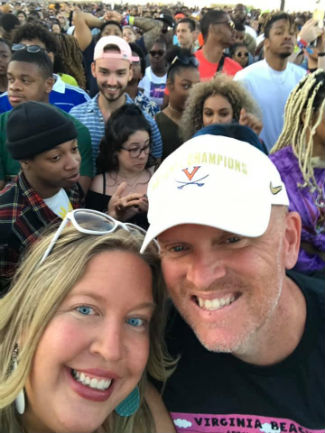 Jay-Z was actually there. That was enough, to me, to sell the notion that Pharell Williams is serious about making Something in the Water an annual event in Virginia Beach.

It had been rumored that the hip-hop icon was going to be a surprise guest for the Pharrell & Friends concert on Saturday night, but when Hova came out on stage, unannounced, and started performing with Williams in what turned into about a 10-minute set, dang.

The schedule that night already had SZA and Travis Scott rocking the beachfront, and then Williams came on stage, and was joined at various points by Missy Elliot, Timbaland, Snoop Dogg, Usher, Busta Rhymes, and another surprise guest, Tyler, the Creator.

Night 1, you may have heard, got rained out, meaning, no Dave Matthews Band, no Gwen Stefani, no rumored surprise guest appearance by Justin Timberlake.

In a grand gesture, I thought, Williams announced that festival organizers will be refunding a third of the ticket price for the weekend because of the missed day of music.

For me, it was all about Saturday, and I got more than my money’s worth.

Pros: What they got right

Police presence: There were police, local and state, everywhere on Atlantic Avenue and along the Boardwalk. Not too obtrusive: it just made you feel safe. With 35,000 people there for a weekend of music, and alcohol (and some funny smells) plentiful, the folks in blue were there to help defuse any possible tensions.

I’m happy to be able to report that I didn’t see anything in the way of tensions all weekend long. There was one minor skirmish not far from where my wife and I were taking in the show Saturday night, but fellow festival-goers helped break the fight up before security or law enforcement needed to get engaged.

They stuck to the schedule, by and large: The Travis Scott show on Saturday night was a bit late, maybe a half-hour late starting. I suspect that this was because there was maybe a delay for one of the big-name acts for the Pharrell & Friends show after his. Aside from that, I thought the shows got started when they were supposed to, and it’s easy with an array of performers slated to take the stage every hour or hour-fifteen or so at a day-long event to get off the rails.

Events at all price ranges: There was a free community church service on Sunday that went pretty much all day, another free community brunch on Sunday. In other words, you didn’t need to drop big money to take part.

My wife and I struck up a conversation with a couple from Richmond on Saturday that felt like one of the many reasons Williams wanted to put the show on.

It was mid-afternoon, and we were all waiting for the big stuff to happen that evening. I don’t remember how it was that we started chatting, but it came down to, the husband and I talking basketball, and the wives (and the twin sister of our new acquaintances’ wife) talking life.

For probably more than an hour.

I don’t mean to sound corny, but, my guess is Williams hoped that Something in the Water would bring folks from different walks of life together to do just what we were doing out there.

Things they can work on for next year

Wi-fi: This is something that was an issue that had an impact on trying to get a read on the weather on Sunday night. Having been rained out on Friday, the weather forecast for Saturday and Sunday looked glorious, no chance of rain either day.

Saturday, no weather issues at all. Perfect beach weather.

Sunday: most of the day, better than perfect. Then, some clouds started rolling out about a half-hour out from the Chris Brown concert, slated to start at 8:10 p.m.

I couldn’t get any access to Wi-fi to try to get a read on the weather. Then, it started raining, then, a brief downpour.

Then, rolling up on the festival, some really dark clouds.

The lack of Wi-fi made it a guessing game.

We decided to ditch the rest of the show to head back to our hotel, roughly a mile away, and missed the last two events of the weekend.

It might be worth investing in whatever kinds of Wi-fi boosters are out there that can make it so that the alerts that we got from the Something in the Water app from the App Store didn’t all show up at once back at the hotel, after we’d left the show.

Also, and this is marketing, but you want your attendees posting photos and videos during events to show how much fun they’re having, to help sell next year’s event.

Couldn’t do that, either, with the lack of Wi-fi access.

That last one is a minor thing, though major, for the organizers. Again, marketing, man. Selling tickets.

Need to work on that.

I’d definitely do this again, and every year, though I have to wonder, for Williams, how he tops this year.

The bar has been set pretty high.

Kudos, in that respect.