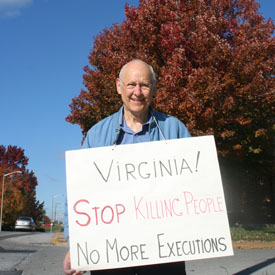 “The attitude of most of us, and I’ve had it much of my life, too, is that criminals get what they deserve, and we have confidence that the system is working right, but we’ve learned that so many things are not working right. Our goal is to bring visibility to some of the issues here,” said Mabry, a 77-year-old retired United Methodist minister and member of Virginians for Alternatives to the Death Penalty, who will walk 10 miles a week for the next 50 weeks in an effort to raise $5,000 for the anti-death penalty group formed in 1991.

Issues with the application of the death penalty were in the news again last month when Virginia executed Teresa Lewis for her role in the murders of her husband and stepson. Her accomplices, including the triggerman, received life sentences, while Lewis received a death sentence amid questions about her mental competency and whether she had been manipulated into participating in the plot to begin with.

“Such inequities are prevasive in the administration of the death penalty. Our capital punishment system is broken,” Mabry said.

Public awareness with issues in the application of the death penalty seems to be having an impact in one key area.

“The trend nationwide is that juries seem to be inclined to give the death penalty in fewer cases now. I think part of that is the growing awareness of the inequities in the system,” Mabry said. “I think there’s also a growing recognition that we can provide the safety and security that society wants with life imprisonment without parole. Certainly with the maximum-security prisons that we have now, it’s harder for prisoners to escape than in earlier days.”

Monies raised will go to Virginians for Alternatives to the Death Penalty.