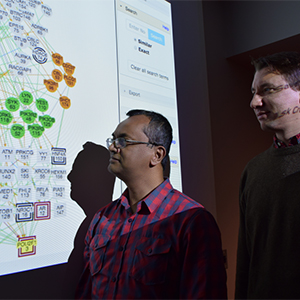 T.M. Murali, professor, (left) and Kurt Luther (right), assistant professor, both in the Department of Computer Science, stand in front an example of the kinds of graphic designs they will crowdsource to visualize the effects of chemical pollutants on cells.

Chemical pollutants in the environment can have wide-ranging detrimental effects on human health causing everything from respiratory disease to neurological dysfunction.

While certain chemicals and their effects on cells are well understood by scientists, such as the hormone-disrupting chemical BPA, little is known about the effects of tens of thousands of other common industrial environmental pollutants — and whether or how they may be damaging our cells at the molecular level.

Crowdsourcing — soliciting large numbers of people primarily via the internet to offer data, services, or ideas — has come into vogue for scientists as a scalable way to collect and manage large amounts of data while engaging the public in scientific research. In this case, users will create graphs of proteins and their cell networks that evoke abstract artistic sensibilities utilizing minimal lines, simple shapes, and primary colors.

“The crowdsourcing of large data sets like these protein networks is a new frontier of sorts,” said Assistant Professor Kurt Luther, who is associated with the Center for Human-Computer Interaction and is also a fellow of the Institute for Creativity, Arts, and Technology. “Up to now, trying to visualize these data sets in order to highlight the relevant connections between proteins and other molecules has been challenging. The unique thing about our grant is that we are asking crowds to work like designers and create visual concepts for the data.”

Luther and his partner, Professor T.M. Murali, are both principal investigators on the project and ultimately hope to make the graphs more useful for the biomedical community to track effects of pollutants.

Trained biologists often manually manipulate automatically determined positions until the network conﬁguration matches their knowledge and instinct for placement of proteins and their networks. The process is time-consuming and requires signiﬁcant expertise in a specialized field.

The system Murali and Luther plan to develop will use automatically generated biological cues to guide users on where to place shapes that represent proteins and their interactions, how to group them, and which elements to ignore. It will also enable users to highlight sequences of molecular interactions that suggest how a chemical may control speciﬁc proteins and processes that occur in the cell.

“By crowdsourcing the network visualizations we hope to reduce the need for having a specialist organize the data and thereby speed up our understanding of chemical effects on human cells,” said Murali, who is also co-director of the Institute for Critical Technology and Applied Science Center for Systems Biology of Engineered Tissues. “Our system will develop layouts through a multistage design process where users serve as brainstormers and generate several layout ideas at once, critics will offer principled feedback, and synthesizers will combine the best ideas from multiple layouts.”

Murali and Luther will also conduct a review by an expert panel of biomedical scientists to evaluate the effectiveness of the system in creating visualizations of chemical response networks and the value this system provides in assisting them to formulate biological hypotheses.

The project is funded by the National Institutes of Health through its Big Data to Knowledge initiative.