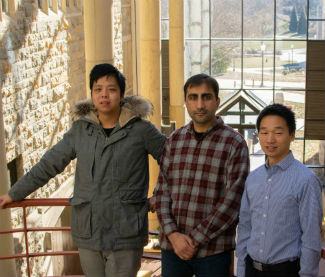 From left to right: Tianyu Liu, a postdoctoral associate in the Liu Lab; Assad Khan, a fifth-year chemistry doctoral student; and Guoliang “Greg” Liu, an assistant professor of chemistry and a member of the Macromolecules Innovation Institute. All three contributed to the research of using block copolymers to create porous carbon fibers. Not pictured is the first author of the journal article, former postdoctoral associate Zhengping Zhou.

A professor in Virginia Tech’s College of Science wants to power planes and cars using energy stored in their exterior shells. He may have discovered a path toward that vision using porous carbon fibers made from what’s known as block copolymers.

Carbon fibers, already known as a high-performing engineering material, are widely used in the aerospace and automotive industries. One application is the shells of luxury cars like Mercedes-Benz, BMW, or Lamborghini.

Designing materials for structure and function

Guoliang “Greg” Liu, an assistant professor in the Department of Chemistry, conceived the idea of creating carbon fibers that wouldn’t only be structurally useful; they would also be functionally useful.

“What if we can design them to have functionality, such as energy storage?” said Liu, also a member of the Macromolecules Innovation Institute. “If you want them to store energy, you need to have sites to put ions in.”

Liu said ideally the carbon fibers could be designed to have micro-holes uniformly scattered throughout, similar to a sponge, that would store ions of energy.

After tweaking a longtime conventional method of chemically producing carbon fibers, Liu now has developed a process to synthesize porous carbon fibers for the first time with uniform size and spacing. He details this work in a recently published article in the high impact journal Science Advances.

“Making porous carbon fibers is not easy,” Liu said. “People have tried this for decades. But the quality and the uniformity of the pores in the carbon fibers were not satisfactory.

“We designed, synthesized, and then processed these polymers in the lab, and then we made them into porous carbon fibers.”

PAN is well-known in the polymer chemistry field as a precursor compound to carbon fibers, and PMMA acts as a place-holding material that is later removed to create the pores.

But in the past, other chemists had typically mixed PAN and PMMA separately into a solution. This created porous carbon fibers but with differently sized and spaced pores. Energy storage can be maximized with greater surface area, which occurs with smaller, uniform pores.

Liu came up with the new idea of bonding PAN and PMMA, creating what is known as a block copolymer. One half of the compound polymer is PAN, and the other half is PMMA, and they’re covalently bonded in the middle.

After synthesizing the block copolymer in the lab, the viscous solution then underwent three chemical processes to achieve porous carbon fibers.

The first step is electrospinning, a method that uses electric force to create fibrous strands and harden the solution into a paper-like material. Next, Liu put the polymer through an oxidation heating process. In this step, the PAN and PMMA naturally separated and self-assembled into the strands of PAN and uniformly scattered domains of PMMA.

In the final step, known as pyrolysis, Liu heated the polymer to an even higher temperature. This process solidified PAN into carbon and removed PMMA, leaving behind interconnected mesopores and micropores throughout the fiber.

Although this breakthrough improves an already high-performing engineering material, perhaps the greater breakthrough is the ability to use block copolymers to create uniform porous structures for energy storage possibilities.

“It opens the way we think about designing materials for energy storage,” Liu said. “Now we can also start to think about functionality. We not only use (carbon fibers) as a structural material but also a functional material.”

Liu had been toying with this idea since he joined Virginia Tech in 2014, but he started formal research on this idea after submitting a winning proposal through the Air Force Young Investigator Program (YIP) in 2016.