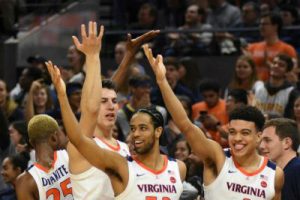 CBSSports.com is reporting that UVA and Florida have agreed to a Nov. 27 game that would be played in the Mohegan Sun in Connecticut.

The two programs have not met in a regular-season matchup. They last played in the second round of the 2017 NCAA Tournament, in a game that Florida won, 65-39.

The report indicates that each would play a game at the Mohegan Sun against a mid-major opponent on Nov. 25 as a tune-up.

According to the report, this would mean that UVA is opting out of the Wooden Legacy, which had originally been scheduled to be played in Southern California in December, with a field including Kansas, UCLA and Georgetown.

The Wooden Legacy is now scheduled to be played in Orlando. Georgetown has already opted out of playing in that event.