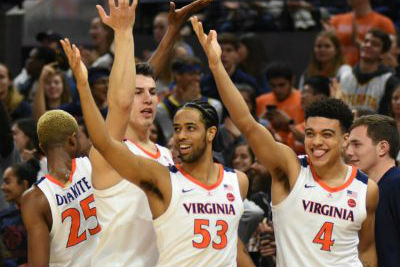 At first glance, preseason #4 isn’t that big a deal when you’re the defending national champs. But for Virginia, it’s the program’s highest preseason ranking since 1982.

This for a program that has been a #1 seed in four of the past six NCAA Tournaments.

The preseason love, lack thereof, is one thing, the results, the other.

There we see it. Virginia, the consensus favorite in the ACC in 2020-2021, was ranked fourth in the inaugural Associated Press Top 25.

Gonzaga snagged the top spot, with Baylor at two, Villanova at three, UVA then at four, and Iowa rounding out the top five.

UVA is tentatively scheduled to face Villanova in December in Madison Square Garden.

Florida, which will face the Cavaliers on Nov. 27, was among those in the Others Receiving Votes category, along with Louisville.

We’re still waiting on dates and times for the ACC games, for probably obvious reasons.

The season opens on Nov. 25, Thanksgiving Eve, against an open-still-to-be-determined.