Reid: ‘A great adventure’ on the way 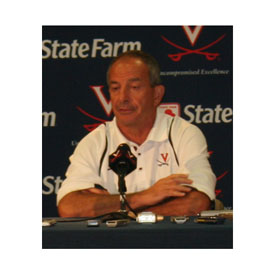 Jim Reid, you could say, discovered Mike London, hiring London as an assistant when Reid was the head man at Richmond, starting London on the track that led him to being named the head coach at the University of Virginia and later hiring Reid as his defensive coordinator.

Reid told reporters at Wednesday’s UVa. football media day that he’s had more fun this spring and summer than he’s had in decades of coaching.

“There’s a level of excitement and anticipation here with all the change with Coach London running the program that isn’t just for the first day, first week, hump day, which is usually about the seventh or eighth day of practice. There’s just a determination to get this thing changed, turned, in a great way,” Reid said.