Subpar quarterback play is the key reason UVA football coach Mike London is on the hot seat the past three years. The bad news for London coming out of the spring is that the two candidates to be the starter in the fall didn’t show well.

“We’ll take the stats from this game, and all the practices and seven-on-sevens and one-on-ones and all those things, to come up with where we are coming out of spring practice,” London said after the spring game on Saturday.

The offense moved the ball well early under Greyson Lambert and Matt Johns, both of whom started games last fall, but as the scrimmage went on, the defense, depleted by graduation, defection and injury, asserted control, holding the offense scoreless in the second half.

The final stats that London and offensive coordinator Steve Fairchilds will have to pick through are cause for concern.

Factor in losses due to sacks, and the passing game produced 3.0 yards per pass play.

This just in: that’s abysmal.

“We had a flow in the beginning, it kind of died in the end, and that’s something we need to work on,” Johns said. 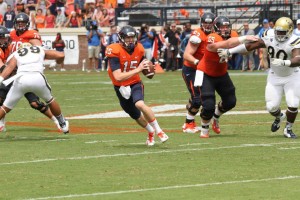 To be fair, the offense was playing a bit shorthanded, too, with the depth chart for the offensive line thin for the spring game, and Fairchilds implementing some changes in approach and philosophy.

Lambert and Johns took a majority of the snaps in 2014 out of the shotgun, but for 2015 the Cavs want to put the QBs under center more to aid the running game.

“We decided we wanted to be able to run the ball, we want to get up under center a little bit more, and that kind of established itself as our ID. We want to be a pro-style team, and being under center, being able to do some play-action pass, kind of helps that out,” Lambert said.

It might seem to be a subtle change, but everything about the position changes when you’re under center.

“There’s a lot of things to work on: moving in the pocket, working on your checkdowns, reading defenses. It’s a matter of getting more reps and experience and taking it all from there,” Johns said.

The bottom line for London is that there is absolutely no margin for error in the fall. Virginia has had four losing seasons in London’s five years, and he almost certainly will not survive another sub-.500 campaign.

Whoever ends up being the guy at quarterback, however that guy ends up taking the snaps, Virginia is going to need to get more production out of the position than it got last year and has gotten from its QBs the past three years, or there’s going to be regime change.

One would assume that London is well aware of that. He was precise in his language after the spring game about the evaluation of the quarterback position that is to come.