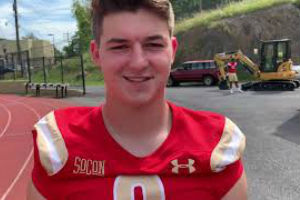 Reece Udinski threw early, often and then kept throwing. The VMI quarterback averaged 47.5 pass attempts per game in 2018, twice throwing more than 70 passes, two other times getting the past 60 mark.

The scary thing is that Udinski broke virtually every record in the VMI book for a passer, and it was a sort of trial by fire, since it was his season in the Air Raid offense installed by offensive coordinator Brian Sheppard in the spring of 2018.

“The first couple of games, I had to get used to the offense. But then, as the year went on, I got a lot more comfortable,” said Udinski, a 6’4”, 224-pound junior from North Wales, Pa. “This year, I think starting off the year right, I feel really comfortable in the offense. I know what Coach Shepp likes to do. I know what my receivers like to do. So, I’m looking forward to getting off to a hot start, and carrying that throughout the season.”

Writers and broadcasters who cover the SoCon expect Udinski to build on his sophomore season, voting him second-team all-conference at Media Day last month.

For Udinski, it’s not the stats, but winning, that matters.

“We weren’t satisfied with what we did last year. There were some close games, and we felt like, if we could have made a couple more games, we would have won that game for our team. I think this year, having a lot of experience, knowing what Coach Shepp likes to do, we have a great relationship, we can win those close games,” Udinski said.

A key will be developing a running game to take some of the pressure off Udinski, at the least keeping defenses honest.

It will help Udinski that he has his favorite target from last season, senior wideout Javeon Lara, returning. Lara was voted first-team All-SoCon in the preseason, coming off a 53-catch, 825-yard 2018 campaign.

Udinski may need to approach his school records set a year ago – 3,082 yards, 302 completions, 20 touchdowns (that one tying the school mark) – to get the Keydets over the hump.

The atmosphere at training camp feels different than in past years.

“We really just want to keep playing our game, keep the focus on getting the job done. We have our own expectations. We expect to win every game. We just want to have that mindset.”