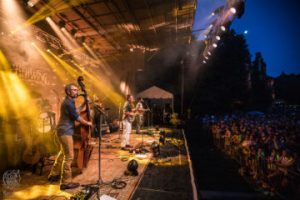 This year, Red Wing also welcomes back jaw-dropping flat-picker Billy Strings, who previously played at Red Wing in 2015 and 2017.

A full lineup of over 40 bands will be announced later this month.

“There is so much competing for our time and attention,” said Trent Wagler of The Steel Wheels. “Much of it clutters the mind and sucks our time away from what we love and the people we strive to be. Whether it’s currently cold outside and we’re far from Red Wing or the days leading up to the fest, give yourself a gift: set aside the phone, close your eyes, take a deep breath, and visualize all of us gettin’ down in the music meadow!” Since the beginning, Red Wing has emphasized great music, great food, and great fun in the great outdoors for the entire family. This year’s festival will once again feature more than 40 bands performing on five stages, the region’s finest food trucks, a curated kids’ area including a climbing wall and slack line course, organized bike rides, group runs and morning yoga sessions beneath the rock towers at Natural Chimneys Park.

On-site camping has long been an extremely popular part of the festival, meaning it sells out far in advance. In anticipation of that happening again, festival organizers encourage interested campers to reserve spaces promptly. Red Wing’s commitment to the small, family-friendly atmosphere it has cultivated since the beginning means that festival tickets also typically sell out prior to the festival.