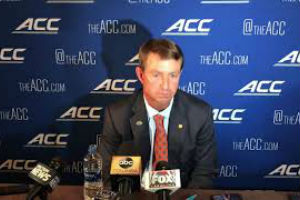 Dabo Swinney whines more than Terry Holland’s dog. (Look it up. That was funny, right there.)

For weeks, Dabo was all crocodile tears about how the CFP didn’t want Clemson, was ready to drop the Tigers to 20 if they lost.

Then, they got in, natch, so now it’s all, we’re the first defending national champ to start #1 in the preseason, not lose and fall to three.

I first saw that point made by my AFP colleague, Seth Megginson, and we had a nice debate on the details on Twitter.

Which isn’t to say that Seth wasn’t right, because he was. Back in 2014, FSU was the defending champ, started that season #1, went undefeated, then was at three entering the playoff.

Point from me isn’t that Dabo doesn’t protest too much, because he does.

Clemson in 2019 beat up a bunch of overmatched teams. We’re talking one close game, that 21-20 win at UNC on Sept. 28 that makes less sense by the day.

Aside from that one, we’re talking about a two-touchdown win over Texas A&M being the only game within 30 points.

That FSU team in 2014: one close win after another, against teams that should have been overmatched.

A bad Virginia team that limped home 5-7 lost 34-20 in a game that was a contest into the fourth quarter.

That FSU fell to third heading into the playoffs was foreshadowing. The ‘Noles got blitzed, 58-20, by #2 Oregon.