Henry looking to make the most of his opportunity at UVA 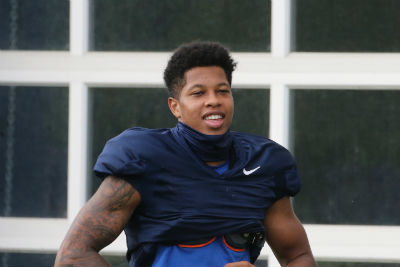 “I had zero stars coming out of high school,” said Henry, a native of Killeen, Texas.

Checks out. I found a Rivals.com recruiting page for Henry.

“Just very underrated,” said Henry, of Henry. “I was smaller. I was way small. Probably about six foot, 150. And St. Francis took that opportunity on me.”

St. Francis, in FCS, isn’t even upper-echelon FCS. In his four years at the school, the Red Flash were a middling 22-24, with one playoff appearance, in 2016, Henry’s redshirt year.

Henry, to his credit, made the most of the opportunity that St. Francis took on him.

Some of it was out of his control – he grew three inches, and at 6’3”, he’s obviously a bigger target against cornerbacks usually four or five inches shorter.

He also worked his butt off in the weight room, fleshing out to 195.

At this point, the zero-star, zero-interest prep recruit was a prospect on the grad transfer market.

He signed with Virginia on May 12, and after a late spring and early summer getting to know teammates and coaches via Zoom, he’s been impressing in camp.

“He’s definitely got a skill set of catching the ball and knack for making plays,” wide receivers coach Marques Hagans said. “Now the main thing with him is just getting him accustomed to our culture, how we do things, and my expectations and standards within the receiver room.”

In other words, there’s opportunity there.

Ra’Shaun Henry has a knack for making the most of opportunities.

“It’s a surreal time right now, especially through the pandemic,” Henry said. “But, you know, finding the school that really fits you, and you know, you can go there, and to be able to call those people, that culture, your family, is always important.”