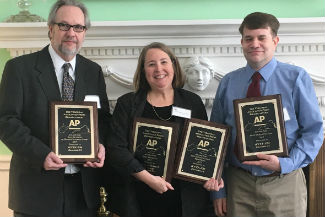 The Radio IQ news staff was recently honored with five awards from the Virginias Associated Press Broadcasters and a Regional Edward R. Murrow Award from the Radio, Television, and Digital News Association.

Radio IQ was awarded Outstanding News Operation of the Virginias by the Virginias Associated Press Broadcasters. Judges noted Radio IQ’s “breadth of reporting and its thoughtful coverage of the Charlottesville rally and the aftermath.”

All awards were in the Large/Metro Radio Market category and included stations in Virginia and West Virginia.

Radio IQ was awarded a Regional Edward R. Murrow Award for Continuing Coverage from the Radio, Television, and Digital News Association. Radio IQ’s coverage of “Charlottesville’s Summer of Hate” included reports on the ground before, during, and after the August 2017 violence, vigils in Blacksburg and Roanoke, and long-term follow-ups in Richmond and Charlottesville. The award was in the Small Market Radio category in a region that includes Virginia, Delaware, Maryland, and Washington, D.C.

Radio IQ News Director David Seidel said it is extremely gratifying to be honored in both individual and organization-wide categories. “It’s a testament to the important and engaging journalism we do, both as individuals and as a team,” Seidel said.