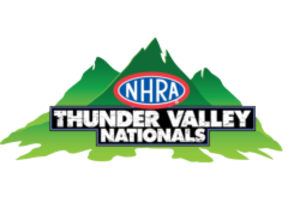 There were a lot of factors to weigh in and consider on Saturday afternoon at the Thunder Valley Nationals.

Could John Force continue his top speed performance on Saturday to propel him into the number one spot in the finals? And could Brittany Force rebound from a late Friday qualifying round that dropped her from 1st to the middle of the pack? Could Doug Kalitta hold the top spot and capture his 50th pole?

Another question in the mind of the drivers and crews was would the cooler weather continue to benefit the track and provide faster qualifying speeds or require further adjustment to the cars?

Saturday afternoon provided surprises answers for the fans and the drivers as well.

Doug Kalitta would overcome a malfunction with his parachute cable in the first qualifying round of the day to hold on to the pole going into Sunday’s finals. “Having a shot at winning Bristol,” replied Kalitta after Top Fuel qualifying.  “I just hope we can pull it off.”

After taking the top spot on Friday, John Force ran a 3.911 and would draw the bye in Sunday qualifying and will face the winner of the Matt Hagan/.  After qualifying, Force said “I’ve got a good hot rod, it’s consistent but not as fast as last night, so we’re going to see what we can do tomorrow.”

“I’ve got to prove to sponsors that I’m still in the game,” commented Force.  “I’m in the game, feeling good. These sponsors spend a lot of money in this economy.”

Doug Kalitta picked up his 50th number one on the 500th NHRA race of his career after second round qualifying. What would it mean for the 31 year driving veteran, 21 of those years in NHRA to pick up a Wally on Sunday?

“It’d be perfect timing for sure,” replied Kalitta. Kalitta added that with it being Father’s Day, his son is at Bristol and the car has been conistent and it is “going to be a little hotter tomorrow than today. Hopefully, it will play right into the day tomorrow.”

In Pro Mod, qualifying was suspended after Marc Caruso’s car slid off into the sandtrap and into the net at the end of the trap. Caruso tried to stop the car and the brakes were locked and the car careened into the safety area at the end of Thunder Valley.  Caruso exited the car under his own power.