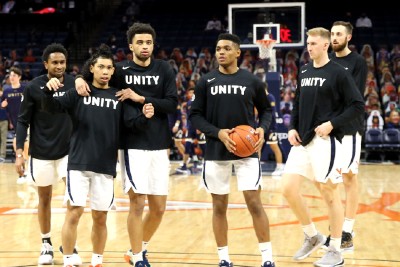 Casey Morsell, a four-star prep recruit, the centerpiece of the UVA recruiting class a year ago, struggled so, so mightily a year ago.

His defensive prowess – he had a 91.5 defensive rating, per sports-reference.com – got him on the floor for 21.8 minutes per game.

It was still painful to watch a kid who was so good in one of the more competitive prep hotbeds just never seem to put it together.

There have been glimpses of the Morsell that we expected in his sophomore season. His shooting numbers were … better: 40.0 percent from the field, 21.4 percent (!) from three.

What seemed to be clicking was, in a manner of speaking, forgetting what he had learned.

The approach at UVA is to coach by metrics, to the point that shots in practice are measured, charted, plotted.

Morsell could be seen ahead of games working on his stroke, trying to add arc to his jumper – which is what the metrics would tell you that you need to do.

But when Morsell is humming offensively, it’s instinctive – a line-drive jumper that comes out with a flick of the wrist.

Morsell had to miss UVA’s last two games, wins over Wake Forest and Boston College, due to COVID-19 – he didn’t have it, but he was forced into quarantine because of contact tracing, that term that we hope fades into disuse in the coming months.

“Basically, I would come in, and the most I could stay there was about 45 minutes each day. I would get a lift in just about three or four times [a week], but for the most part my access to the gym was limited. For the amount of time that I had in the gym I had to take full advantage of it. I spent most of my time just running, staying in shape, and just you using the quarantines to my advantage,” Morsell said.

It wasn’t hundreds, thousands of jumpers because he had nothing else to do, then.

It was a reversion to the form that made him the hotshot recruit.

“I think he’s simplified, and you saw that today. I didn’t expect him to be kind of in that sort of rhythm to go three-for-three from three,” coach Tony Bennett said.

That’s really all it is – Morsell has simplified his jumper.

It’s almost as if he was overthinking it, and then, like a hitter in a slump, trying different things to get out of it, he lost the muscle memory from when he’d been successful.

Maybe the quarantine made him clear his head.

“I am using 2021 as a new start, a new beginning,” Morsell said postgame. “I am just learning from all my mistakes last year, and I am working on overcoming difficulties that I have faced already this year.”

And, yeah, it’s frustrating, being quarantined for a virus that you don’t even have.

“It was tough. I had to watch the games, just like everyone else. I had to watch on TV, watch on the ACC Network,” Morsell said, and wouldn’t you know it, nobody followed it to ask if he’s bought either a TacShaver or Bell + Howell Night Vision Glasses, because, come on, you see the commercials roughly 75 times during the two hours.

“You see that you see things differently, especially with television. You see things could have gone differently in different situations. So basically, the things I saw from the TV, I just wanted to apply that to the game today,” Morsell said.

Maybe he did buy the night vision glasses …