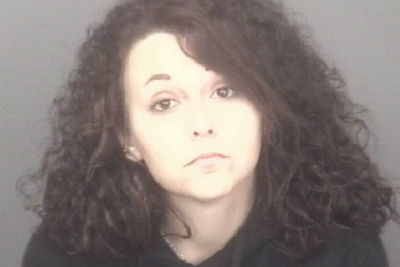 A Waynesboro woman led authorities on a 17-minute pursuit that ended with her and a male in custody, two law enforcement officers sustaining minor injuries, and a Staunton K9 dog dead.

The incident unfolded at 8 p.m. Monday. Members of the Staunton Police Department and Augusta County Sheriff’s Officewere at the Staunton Walmart for an investigation when, unrelated to the investigation, they observed an individual wanted on outstanding warrants inside a vehicle as a passenger.

Deputies with the ACSO and Virginia State Police troopers responded to assist in stopping the suspect vehicle, and an approximate 17-minute pursuit ensued.

The suspect vehicle was stopped on Douglas Lane just outside of Waynesboro, and three people were detained. One was ultimately released, and the other two (Brandi Campbell and Christopher Hoylman) were taken into custody on outstanding warrants.

Campbell was charged by the Staunton Police Department with felony hit and run, felony assault on law enforcement, reckless driving, obstruction of justice, and felony eluding law enforcement. Additional charges related to the pursuit in the county are pending.

Campbell is being held without bond at Middle River Regional Jail.

After the conclusion of the vehicle pursuit, a K9 team from the Staunton City Sheriff’s Office responded to the scene to assist in locating a firearm that had been thrown from the vehicle. A handgun and suspected drugs were recovered.

During the search for the weapon, K9 Cara suffered a serious injury and was subsequently euthanized.