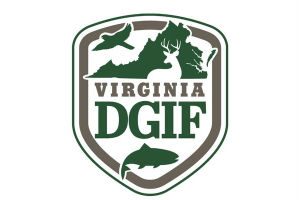 In collaboration with its project partners, the City of Lexington and the U.S. Fish and Wildlife Service, the Department of Game and Inland Fisheries recently completed the demolition and partial removal of Jordan’s Point Dam on the Maury River in Lexington.

After years of planning and months of waiting for the river to reach acceptably low flows, the compromised structure has successfully been removed.

Beginning in late April, preparation work began with the installation of a construction fence and an access road. Eight concrete piers that no longer supported a railroad bridge were removed from mid-channel and a rock causeway was constructed to allow heavy equipment to approach the dam. High water inhibited access to the dam through much of May, but ideal working conditions at the end of the month allowed the removal to take place. Material from the early 1900’s mill dam was removed from the river channel and disposed of off-site at a concrete recycling facility. The remnant of a wooden crib dam was revealed immediately upstream during removal of the concrete dam, and this structure was intensively documented by the architectural historian who was onsite during the entire project. It, too, was then removed, with numerous timbers salvaged for potential interpretive use by local historical organizations. The river now flows naturally through Jordan’s Point Park.

“As a native of Lexington and Rockbridge County, I could not be more excited to see this stretch of the Maury River return to its natural state,” said Secretary of Natural Resources Matthew J. Strickler. “Removing dams, like the one at Jordan’s Point that no longer serve a purpose, is a priority as we look to improve fish habitat and increase recreational opportunities on Virginia rivers.”

This effort has returned the river to a free-flowing system with diverse pool and riffle habitat, opened upstream fish passage, removed the mandatory portage and improved public safety in City-owned Jordan’s Point Park. In short order, the river will adjust to its renewed condition with vegetation re-establishing on the banks; insects, fish, and mussel communities will flourish and the public can safely enjoy the beauty of the river.