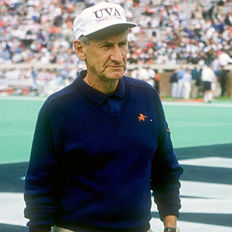 The event will take place at 10 a.m. at John Paul Jones Arena and is free to the public. Free parking is available in the JPJ and McCue Center parking lots.

Washington Post columnist John Feinstein will serve as the master of ceremonies. He covered Welsh during his coaching career, later wrote a best-selling book on the Army-Navy rivalry (A Civil War) and served as a color analyst on the Navy radio network for 14 seasons.

A variety of speakers will offer their memories and stories of Welsh from his coaching tenures at Penn State, the Naval Academy and Virginia.

Former Nittany Lion players Franco Harris, Lydell Mitchell and Charlie Pittman will recall the impact Welsh made on them in his first coaching position at Penn State.

Bob Tata, Jr., a former standout placekicker at Navy who was a graduate assistant coach for Welsh at UVA and long-time Cavalier assistant football coach Tom O’Brien will recall stories from Welsh’s tenure at the Academy and on Grounds.

Several videos highlighting Welsh’s accomplishments will be presented as well as remarks from two of his children, Adam and Kate Welsh.