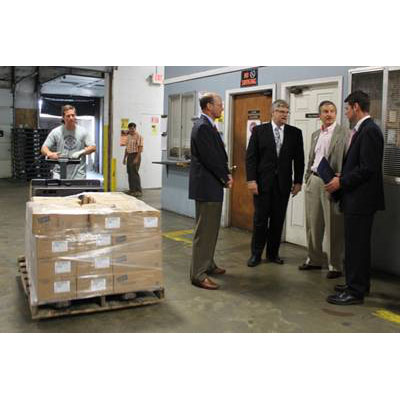 With partners from the Virginia Department of Agriculture and Consumer Services, the Harrisonburg/Rockingham Chamber of Commerce and the Virginia Poultry Federation in attendance, the Blue Ridge Area Food Bank received 8,650 pounds of turkey meat on June 20 from VPF members.

VPF President Hobey Bauhan said the donation was in response to the challenge set by Governor McDonnell in his “Governor’s Bowl” Food and Fund Drive and to highlight his recent proclamation designating June as “Virginia Turkey Lovers Month.”

Bauhan said, “Turkey Lovers Month helps remind consumers of all the delicious ways to prepare and enjoy a wide variety of turkey products year-round, and also highlights the economic importance of an agricultural sector that employs more than 3,000 people and supports more than 250 family farms in the Commonwealth.  Highlighting this important agricultural sector goes hand-in-hand with the Governor’s efforts to address hunger during a time of increased need within our food bank system.”

“We’re thrilled to have the support of the poultry industry at a time when food donations from manufacturers have been declining,” said Larry Zippin, CEO of the Blue Ridge Area Food Bank. “This protein-rich contribution is vital and much appreciated as it will provide nourishing meals to more than 7,000 people in need.” Founded in 1981, the BRAFB is the largest organization alleviating hunger in western and central Virginia. Headquartered in Verona, the Food Bank serves 25 counties and nine cities through distribution centers in Charlottesville, Lynchburg, Winchester and Verona. The BRAFB distributes more than 20 million pounds of food annually to more than 120,000 people each month through a network of 250 community partners.

Matt Lohr, VDACS Commissioner, presented Gov. Bob McDonnell’s proclamation for Virginia Turkey Lovers’ Month at the event and said he was so pleased at how the industry of agriculture has responded to the Governor’s challenge. “As we watched the unloading of turkey here in the Valley, the Virginia Crop Improvement Association was overseeing the delivery of more than 1,500 jars of peanut butter to the Federation of Virginia Food Banks. That followed a similar donation of peanut butter by the Virginia Peanut Growers Association and the Peanut Board.”

Frank Tamberrino, president and CEO of the Harrisonburg/Rockingham County Chamber of Commerce, explained how Chambers of Commerce across the state are participating in the “Governor’s Bowl” Food and Fund Drive challenge with donations such as this one. Tamberrino stated, “This is a wonderful gesture on the part of our area’s poultry industry and the Chamber extends a sincere thanks to those who made this happen. I challenge others in our community to donate enough additional local products to go along with the turkey and provide a complete meal for those served by the poultry industry’s donation.”