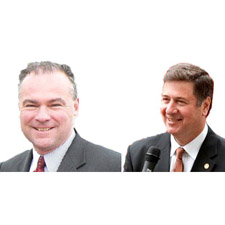 Yesterday the news from Public Policy Polling was that Barack Obama had an eight-point lead statewide in his race for re-election.

Today the news is that former Obama vice-president short-lister Tim Kaine is in a dead heat in another PPP survey of Virginians on their preferences for the U.S. Senate.

The poll numbers suggest that Kaine might have room to improve his numbers – he is getting support of 77 percent of Democrats (Allen has the support of 83 percent of Republicans), and Kaine holds a 68 percent-21 percent lead among African-American voters, a margin that would seem likely to bulge as we get closer to November.