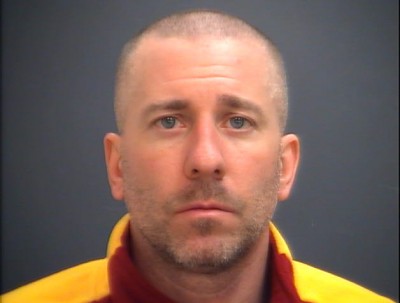 Our final nominee for dumb criminal of 2014: James Edward Frazier, 41, of Waynesboro, who was apprehended without incident within 45 minutes of a reported Monday morning bank robbery.

Waynesboro Police responded to a robbery in progress at Bank of America located at 1415 W. Main Street this morning at approximately 11:11 a.m. Enroute officers were advised that a white male suspect had approached the teller with a note demanding money and indicating that he had a gun. Further information was passed to officers as they arrived that the suspect had left the bank in a vehicle with an undisclosed amount of cash but no direction of travel could be ascertained.

The bank was secured and officers began to conduct an investigation at the scene as other units fanned out across the city searching for the suspect.

The entire incident was caught on the bank’s security camera system and officers immediately recognized the suspect who made no effort to conceal his identity. Further investigation led officers to a residence on South Delphine Avenue where Frazier was taken into custody at 11:56 a.m. without incident and some of the money as well as over one ounce of crack cocaine was recovered.

Upon questioning the suspect and other interviews officers learned that the robbery directly preceded a narcotics purchase and the remaining stolen money was used in that transaction.