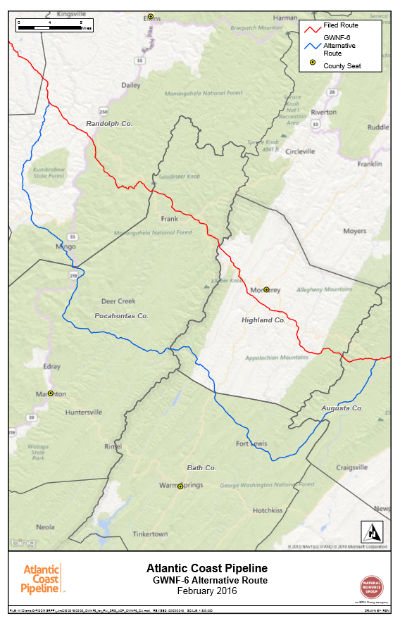 Dominion Energy announced plans today to re-route the proposed Atlantic Coast Pipeline through Highland, Bath and Augusta counties. The new route comes in response to the United State Forest Service’s decision in January to reject the old route due to the environmental damage it would cause on public lands.

The new route would cut through Fort Lewis and come close to Warm Springs, home of the historic Homestead Resort. It would also still slice a large and permanent clear-cut through the George Washington and Monongahela national forests.

The entire project would run over 550 miles to carry fracked natural gas from West Virginia, through Virginia and North Carolina. It would be larger in diameter than the Keystone XL, and cut large and permanent clear-cut throughout the entire length of the pipeline.

“This new route would still cause dramatic forest fragmentation through some of the most high-quality forest habitat in our region,” said Ben Luckett, Staff Attorney with Appalachian Mountain Advocates.

The new route would impact about 249 new landowners in Randolph and Pocahontas counties in West Virginia, and in Highland, Bath and Augusta counties in Virginia. Appalachian Mountain Advocates has been representing landowners in both states pro bono in their efforts to bar Dominion’s surveyors from their private property.

“We’re disappointed Dominion would threaten a whole new set of Virginians and West Virginians when the pipeline is not even necessary to meet our energy needs,” Luckett said.

Conservation groups remain highly concerned about the impacts of building this or any gas pipeline. The groups have called on the Federal Energy Regulatory Commission to conduct a comprehensive review of the entire slate of natural gas projects proposed for the region.

And at a cost of more than $5 billion, the ACP represents a major investment in an outdated fossil fuel. Many climate scientists believe that natural gas causes even more damage to the climate than coal. Ratepayers would be saddled with paying for the pipeline for decades, rather than investing those same funds in developing affordable clean energy.

“Whatever the route, this proposed pipeline would lock us into decades more of dirty fossil fuels and block us from fully shifting to clean energy. Whether you’re in the path of this destructive project or not, we will all be negatively affected, and should take every opportunity to voice our concerns,” said Hannah Wiegard, Virginia Campaign Coordinator for Appalachian Voices.

“While we’re pleased Dominion has chosen not to ram this pipeline through sensitive habitat areas, it remains a wrecking ball for our climate. There’s only one sure way that Dominion can help protect a livable future for vulnerable species and all Virginians: by investing in truly clean energy solutions, not a dirty and dangerous pipeline. Reliance on fracked gas wrecks our climate on par with burning coal. When Hampton Roads residents face rapid sea level rise and Richmond ranks among the top asthma capitals in the U.S., we need to invest 100% in solar, wind and energy efficiency solutions, not new fossil fuel infrastructure,” said  Drew Gallagher, Field Organizer with the Chesapeake Climate Action Network.

“Dominion has proposed a knee-jerk and ill-conceived adjustment to its favored route rather than a solution that truly attempts to minimize the harm to this region,” said Greg Buppert, Senior Attorney at Southern Environmental Law Center. “To prevent unnecessary impacts to our communities and environment, we must understand whether the Atlantic Coast Pipeline is truly needed to meet the regional demand for natural gas in light of the changes to existing pipelines that are already poised to bring more gas into Virginia.

“The new route also raises fundamental questions of fairness. FERC must put the Atlantic Coast Pipeline on hold until the citizens of Bath County and other communities along the route have the same opportunities to understand the project, evaluate its impacts, and make their voices heard,” Buppert said.