Personal outreach to landowners is vital to conservation program success 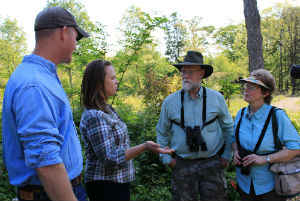 Virginia Tech College of Natural Resources and Environment research published in the scientific journal PLOS ONE shows that private landowners trust conservation agencies more and have better views of program outcomes when they accompany conservation biologists who are monitoring habitat management on their land.

Federal conservation programs funded through the Farm Bill, such as Working Lands for Wildlife and the Regional Conservation Partnership Program, provide private landowners with financial and technical assistance to conduct conservation on their lands. Since 2012, efforts through these two programs have helped landowners create young forest habitat to benefit wildlife, such as the at-risk golden-winged warbler.

According to lead author Seth Lutter, a master’s student in fish and wildlife conservation, the goal of the research was to understand how effective these habitat programs are from a social perspective. The researchers were interested in evaluating how outreach could influence landowners’ program experiences and possibly their future management for wildlife on their land.

Lutter worked with Ashley Dayer, assistant professor of human dimensions in Virginia Tech’s Department of Fish and Wildlife Conservation, to survey landowners to supplement a wider NRCSConservation Effects Assessment Project (CEAP) assessment. The CEAP assessment, led by Jeffery Larkin, professor of biology at Indiana University of Pennsylvania and forest bird habitat coordinator with the American Bird Conservancy, evaluates the effectiveness of young forest management in creating quality habitat for the golden-winged warbler and other wildlife species.

The phone survey was conducted with a group of landowners who had participated in NRCS programs to manage young forest since 2012. These landowners had voluntarily allowed biological technicians onto their properties to monitor bird populations and vegetation regrowth as part of the assessment project. Some landowners accompanied these technicians on site visits, while many chose not to. In addition, some landowners received another form of outreach — personalized mailings that described the birds detected on the monitored property.

These findings suggest that outreach, particularly in-person interactions, can have a significant effect on shaping landowner experiences with conservation programs. At a time when funding for agency outreach is tight, these results are particularly important.

“This study shows the value of investing in face-to-face interactions and relationship building,” Lutter explained. “Further, the results show an important and unexpected role that biological monitoring technicians can play in building landowner trust with the agency delivering conservation programs.”

Dayer and Lutter hope their results will help agencies like NRCS focus their efforts on effective outreach strategies, including training technicians and field staff on landowner interactions, encouraging site visits, and providing feedback to landowners on management outcomes.

“This study gives NRCS a unique perspective on how landowners perceive the conservation planning help we provide them to manage sustainable working lands and emphasizes the importance of including landowners when assessing outcomes of conservation efforts,” said Charlie Rewa, the NRCS biologist coordinating CEAP’s wildlife component.

Dayer added, “Private landowners are critical to the health of our nation’s wildlife populations. Ensuring that conservation programs are designed and delivered in a way that works for landowners and fosters their continued interest in conservation is essential.”

Moving forward, Lutter and Dayer will further explore the experiences of landowners in programs to manage young forest in an effort to understand what causes some of them to manage habitat after incentives from conservation programs have ended. This research will build on a literature review about management persistence after conservation programs that Dayer and Lutter published last year.

Dayer, who is affiliated with the Global Change Center housed in Virginia Tech’s Fralin Life Science Institute, will also follow up on this study’s findings with research into the effects of outreach in the context of biological monitoring for eastern hellbender salamanders in Southwest Virginia.