Pericles with The Motley Shakespeare Players 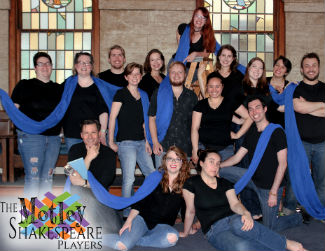 In bringing to life the story of Pericles, Morosco’s vision will focus on how Pericles, the Prince of Tyre, embarks on a epic voyage to foreign lands, encountering a wild diversity of cultures and ideas, and how, in witnessing their stories and perspectives, his quest transforms him. Under the watchful eye of the goddess Diana, this magical production will bring to life the grand adventure of Pericles, his wife Thaisa, and his daughter Marina as they are separated and forced to find their own way in the world.  With shipwrecks, dances, riddles, and pirates, Pericles and his family navigate a whirlwind journey towards revelation and reunion.

Admission is pay-what-you-will, and half of all donations received will go towards The Polaris Project which combats human trafficking. This production of Pericles begins the Motley Festival, which includes reprisals all of their shows and runs March 22nd through March 26th at the Blackfriars Playhouse and the Masonic Building.  For more information on the Motley Festival, visit www.motleyshakes.com/Festival.

For more information on Pericles, visit The Motley Shakespeare Players at www.motleyshakes.com/Pericles or email them at [email protected].