Perception of reality: Research shows how we see may determine what we see 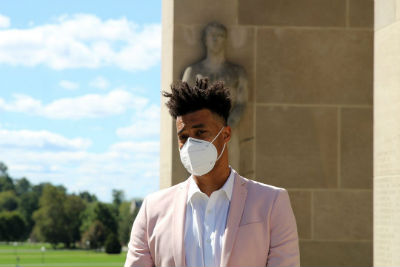 One day, while working as a graduate assistant in Miami, Florida, Broderick Turner decided to use his lunch break to catch up on some much-needed sleep. Arriving at his home alone, Turner laid down on his couch. A short time later, he was awakened to the shouts of several police officers, all standing in his living room with their guns drawn and pointed directly at him.

“Apparently, my silent alarm went off and automatically called the police,” Turner explained. “At first, I was receiving confusing and contradictory instructions from the police officers in an extremely aggressive manner.”

Quickly shaking the sleep from his head, Turner notified the police officers that they were being filmed by the home’s security cameras – the truth – and that the footage was being uploaded to the cloud – a bluff.

“Their demeanor immediately changed from one of aggression to that of calm,” he said. Once the responding officers realized their error and vacated his home, Turner was left with more questions than answers. Not the least of which, “what if this had gone differently?”

Several years later, Turner, now an assistant professor in the marketing department in the Pamplin College of Business, has managed to turn a dangerous and potentially tragic situation into a groundbreaking research paper. Last year, Turner published a study examining the judgments of intent for observers of body camera footage as opposed to observers of dash camera footage.

“Our research determined that bodycam footage was deemed less intentional than the dashcam footage,” he explained.

“Why? We believe that bodycam footage makes it more difficult to make intentionality judgments because there is less person to be seen in this footage.”

Turner continued, “Attributional judgments, like intentionality, need a person in the frame to attach judgment to. In the bodycam footage, because you cannot see the person, you can’t as easily attach judgment to them.”

The research documented the effect by using scripted videos as well as the real police footage. For his research, Turner placed cameras on and around his co-workers — with their permission, of course — and set them up with different scripted situations, ultimately having observers determine the intent in those videos, just as they had done with the real police footage.

In each situation, Turner stated that he was genuinely surprised by the results. “I assumed people would take the perspective of the subject in first-person video footage.”

Though his research revealed that police bodycam footage did not aid in determining the intent of the wearer, Turner believes that police bodycams are still useful in informing public policy regarding surveillance of police conduct.

“All officers should wear bodycams as those cameras essentially become dashcams for the other officers,” explained Turner.

Turner added that he believes his research will prove useful beyond scrutinizing police activity.

“From a marketing perspective, it asks the question, ‘what should companies show?’,” he said. “I want to take this information to the consumer world and tell companies ‘this is what you should do to sell more.’”

Regarding this and future research, Turner stated that he is always open to outside collaboration.

“I have a weekly lab where I bring people in to answer questions,” he explained. “There is an opportunity for alumni to bring in their outside expertise. Theories generate insights which then generate profits. It is a positive feedback loop.”

As a professor, Turner makes sure that his work is always focused on his classroom.

“The reason professors perform research is, if they are doing it right, they are preparing their students to be equipped five years out.”

He continued, “I want my students to be ahead of their peers. I ask myself, in five years, will this be important, will it matter.”