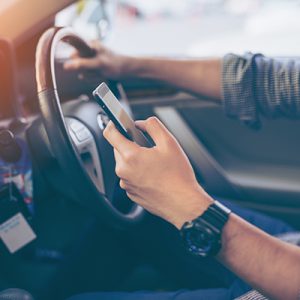 Put away the phone, and keep your eyes on the road. That’s one of the messages being emphasized during Distracted Driving Awareness Month in April.

A survey conducted by the National Highway Traffic Safety Administration revealed 660,000 drivers use phones or manipulate electronic devices while driving at any given daylight moment. While data is mixed on the dangers of talking on the phone, the evidence is clear for texting or manipulating devices.

According to the Insurance Institute for Highway Safety, a study of over 3,000 drivers indicated crash risk was two to six times greater when drivers were handling a cellphone. When drivers’ ages were considered, there was a significant risk increase for drivers under 30 and over 64.

Cellphones and texting may be at the top of the list for distracted driving, but other dangerous activities include adjusting the radio, grooming and applying makeup, operating a navigation system, eating or drinking, and talking to others in the vehicle. In fact, distracted driving is defined as any activity that diverts attention from driving.

Researchers have found brain activity associated with visual processing and attention is suppressed when drivers are cognitively distracted. This can lead to “inattention blindness,” where drivers fail to comprehend or process information from objects in the roadway, even when they are looking at them.

According to the Virginia Department of Motor Vehicles, 15% of all crashes were distraction-related in 2018. The top jurisdictions for total driving fatalities were Prince William County, Fairfax County, Fauquier County, Hanover County, Spotsylvania County, Stafford County and the cities of Richmond, Chesapeake and Virginia Beach.

The Virginia General Assembly has passed new legislation prohibiting any person from holding a handheld personal communications device while driving, with some exceptions such as to report an emergency or if a driver is lawfully parked or stopped. Once signed by the governor, the law would take effect Jan. 1, 2021.

Drive Smart Virginia, a nonprofit organization dedicated to raising awareness and changing behavior to improve road safety, says people need to buckle up, put their phones down and just drive.

“The effects of this epidemic are felt by everyone. The insurance industry continues to see claims increase from distracted driving, and as a result insurance premiums rise across the board,” said Darlene Wells, executive vice president and general manager of Virginia Farm Bureau Mutual Insurance Co., and a Drive Smart Virginia board member. “It’s important that drivers avoid distractions and focus on the road.”