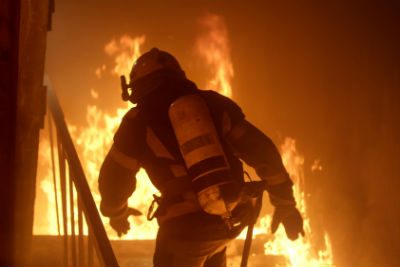 Four adults and six children have been displaced as a result of an early morning structure fire in Harrisonburg.

The Emergency Communications Center received a call at approximately 1:37 a.m. Tuesday for a report of a residential structure fire in the 400 block of East Gay Street. Crews arrived on location in less than four minutes to find a Cape Cod-style residence with flames and smoke showing. Additional resources were called, bringing a total of 23 firefighters to the scene.

Firefighters determined that all occupants escaped prior to their arrival. Crews quickly located and extinguished a fire that started on the back porch, completed a search for hidden fire and ventilated the structure. Although the home did have smoke alarms, firefighters found that the batteries had been removed from the closest one to the fire.

“There is no doubt that a tragedy was averted here this morning,” Harrisonburg Fire Chief Ian Bennett said. “Although everyone was able to escape, the location of the fire and the volume of smoke produced could have easily been deadly. Functioning smoke alarms are critical in every home in the City.”

One adult female and one infant child were transported to the hospital for evaluation of smoke inhalation. Their condition was considered stable at the time of transport. The family is being assisted by the Red Cross.

The cause of the fire has been determined to be accidental as a result of malfunctioning electrical wiring /equipment on the back porch of the home. Damage has been set at $20,000.

The fire department can be contacted during business hours by calling 540-432-7703, stopping by any fire station, or by social media.