By Rosaire Bushey and Alex Parrish 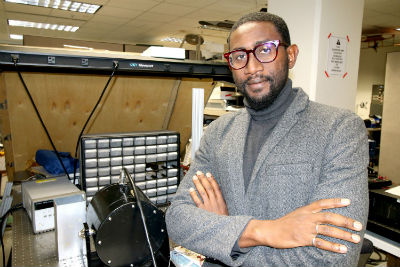 “The U.S. power grid is more than 50 years old and there’s more than 150,000 miles of it ⁠— a lot of it in fairly remote areas,” said Barry. “The overhead power lines are exposed to harsh environments and wind-induced vibrations that limit their lifespan.”

Barry’s project proposes a multifunctional self-powered autonomous robot (SPAR) for intelligent vibration control and monitoring of power lines. But before a robot can be built, there are forces that need to be fully understood.

“We need a fundamental understanding of nonlinear dynamic interactions between wind forces, vibrating cables, and a mobile robot, and this hasn’t been explored yet,” Barry said. “The research goal is to create the tools that will enable construction of a SPAR.”

Normally, power lines are fitted with passive vibration absorbers. These are often ineffective because of their narrow frequency bandwidth, and they contribute to fatigue damage in cable strands, which can eventually result in line failure.

“Inspections of lines are usually done by people on foot patrols or via helicopter-assisted inspection,” Barry said. “Both techniques are expensive and dangerous for maintenance personnel. Current inspection robots are starting to be seen but they are bulky, heavy, have a short run time, are energy inefficient, and expensive.”

Barry believes that the research necessary to build SPAR will provide fundamental breakthroughs at the interface of energy harvesting, fluid-structure interactions, and vibration control. The project will be broken into four tasks: