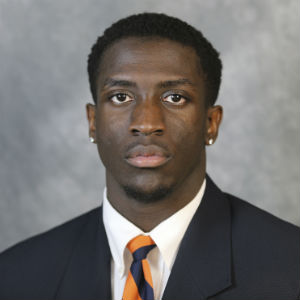 UVA wide receiver Olamide Zaccheaus has been named the Atlantic Coast Conference Receiver of the Week for games played through Sept. 16. This is the first career weekly accolade for Zaccheaus.

Zaccheaus (Plainfield, N.J.) amassed a school-record 247 receiving yards in UVA’s 45-31 win against Ohio in a game played at Vanderbilt Stadium. It marked the second most receiving yards by an FBS player this season and ties for the 10th best single-game total in ACC history. In setting the UVA single-game record, Zaccheaus eclipsed the 241 receiving yards by Ken Shelton in 1974 against William & Mary. Zaccheaus had scoring catches of 86 and 77 yards. The 86-yard touchdown reception in the first quarter was a career long and his third reception of 80 yards or more, which extends his UVA career record.