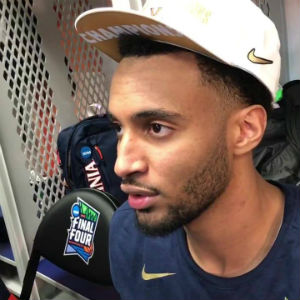 Braxton Key was an important contributor to the Cavaliers’ championship run, and he’ll play an even bigger role in their follow-up act.

Five Virginia players played more than Braxton Key this season. Zero players had more rebounds than he did. The Alabama transfer became the first player to average at least 5.5 points and 5.2 rebounds on at least 30 percent three-point shooting since Malcolm Brogdon in 2013-2014. (Isaiah Wilkins and Anthony Gill would have qualified but didn’t attempt enough threes to be considered.) Key’s ACC-play defensive rebounding rate of 22.4 was fifth in the conference. He also provided really strong defense before the shot. Key’s 36 steals ranked second on the team and his 21 blocks ranked fourth.

Key’s greatest strength, though, goes beyond his impressive rebounding numbers or any numbers, really. He was terrific in adapting to any role he played. Sometimes he’d play alongside fellow wing De’Andre Hunter. Sometimes he’d play alongside one of Virginia’s three bigs. Sometimes, such as in the national championship game, he was the de facto “big.” Key was asked to do a variety of tasks off the bench, and more often than not, he did those tasks very well.

Both areas are a bit concerning for different reasons. At Alabama, Key shot 59.4 percent at the rim as a freshman and 65.2 percent at the rim as a sophomore. There’s no real apparent reason why that number dropped off so significantly at Virginia. And while Key has never been an especially “good” three-point shooter, his inability to consistently knock down the deep ball made lineups that featured both him and a big man more one-dimensional offensively than what Virginia would have wanted.

Key slid into his role, at least defensively, very well in his debut season as a Cavalier. But the offensive end of things means there’s still much to be improved. That probably starts with the three-point shot. At one point in the regular season, Key made just one three-pointer over a month’s worth of time. The struggles weren’t due to a lack of work. Key told reporters he’d take hundreds of extra shots before or after practice to try to figure out where his long-range game had gone. It just didn’t always come together for him. If Key can raise his three-point percentage even up to 34 or 35 percent, that’s an important jump to make.

Furthermore, Key can expand his overall offensive game. He wasn’t much of an individual scorer, and when he did look to create his own shot, that usually came in the form of attacking the rim. As mentioned earlier, though, Key didn’t finish particularly well at the rim. This weakness was usually masked because Virginia didn’t really need Key to play a big role offensively. He only had one game — against Florida St. in the regular season — in which he took more than 10 shots. But in the upcoming year, Key will be a bigger part of the offense. He has to be. Virginia simply won’t have the top-level skill for Key to be a third, fourth or fifth option when he’s on the floor, as he was his first season in Charlottesville.

Key seemed to be a perfect addition to Virginia as soon as he announced his intentions to transfer there last May. A big, physical player with a versatile skill set on the defensive end, Key fit right in and made a major impact. Billed as a “3-and-D” player, Key really only delivered on the latter half of that description. But, boy, did he deliver. Key’s rebounding was simply outstanding.

How outstanding, you ask? Key is the only bench player to lead Virginia in rebounds this millennium.

There’s ample room for Key to improve offensively. Considering Virginia is losing its three best offensive players, his progress on that end will be an important development. A good starting point, though, is that Key’s offensive game is built on efficiency: 93 percent of his shots came either at the rim or from three. Only seven percent came from the midrange, generally considered the least efficient area. Furthermore, this is Key’s first full offseason at Virginia, which will help, too. As he grows into Virginia’s offense and continues to improve individually, Key should have a more major impact in his senior year.