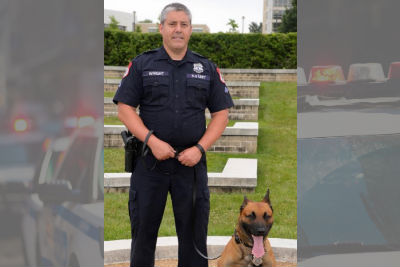 Officer Tim Wright and his K9 partner Doerak are retiring from the Harrisonburg Police Department, effective Jan. 1, which is this coming Friday.

Wright will retire after 25 years of service to the citizens of Harrisonburg. Starting as a full-time officer in 1996, Wright has served in the department’s operations and special operations bureaus.

Doerak has been on the police force and partnered with Wright for six years.

Doerak is directly responsible for 192 arrests, seizing over $31,900 of drug money, had over 300 drug detection deployments, and 11 evidence searches.

He alerted on countless amounts of drugs including marijuana, methamphetamine, cocaine, heroin, and ecstacy.

Wright plans to enjoy his retirement by spending more time with his family, Doerak and his other family dog.