Number of different types of dresses 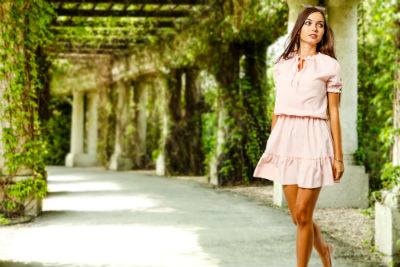 History has shown that the first dress was made of linen over 5,000 years ago in Egypt. It was called a Tarkhan dress, beautifully made, and worn by ancient Egyptians who came from wealth. The Tarkhan dress was so beautiful in fact, that it would fit well in a modern day department store. Other dresses in history were known to be made of animal skins or plant fibers, but none over 2,000 years old have been discovered.

Beginning in the 1550s, center and high society ladies in Europe wore dresses which incorporated a frock, stays, kirtle, outfit, forepart, sleeves, ruff and a partlet. Underpants were not worn underneath. In England, Queen Elizabeth directed what sorts of dresses ladies were permitted to wear.

By the 19th century, dresses were simplistic and made out of lightweight material, but by the 1830’s many were made of steel wire or whalebone, and they had oversized with puffy sleeves. Later in the 1800’s waistlines were being accentuated with corsets. The skirts were long; the front was flat, and the back was fluffy.

Nineteen twenty-five brought about a revolution in women’s clothing.They stopped wearing longer dresses and  started wearing knee length dresses.Showing off their figure became less important, and they strived for a boyish look. The 1930’s brought about another conservative, longer style, but during World War II the short hemline made its way back in an effort to ration material.

Dress styles continued to change in the following years and designers became more popular. In 1947, Christian Dior designed longer dresses with smaller waists to show off a woman’s ‘hourglass’ figure. By 1965, Mary Quanthad had invented the mini skirt and dress, and women’s dresses were designed to be less formal and more relaxed.

Today, there are more than 40,0000 fashion designers in the world, most of which are in the United States and design dresses. Some of the most famous dress designers include Donatella Versace, Coco Chanel, Ralph Lauren, Marc Jacobs, Michael Kors, Bebe, and Christian Dior.

Dresses have continued to evolve being made with various materials and different styles through the years, and today many may be surprised to know that there are over 70 different types of dresses. Some are designed for different types of body styles, while others are made to enhance various body parts.A few dress options that are important for some people include length, neckline, and sleeves. Others may be more concerned about brand, fabric, or color. Dresses are also made to wear for different occasions. The following is a list of dresses which are currently available today:

Unlike in previous history, today there does not appear to be any specific dress style favored, except on an individual basis per personal taste. As dress options continue to grow, and with so many dresses to choose from, there should be no reason why a person should not be able to find a dress that is fitting to their personal liking, style, or occasion. It may take some searching, but it is out there to be found.