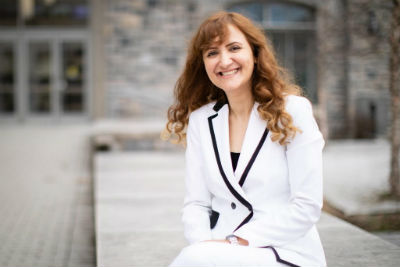 It is expected that by 2030, 80 percent of all electric power will flow through power electronics systems.

With an increasing need for more energy to power homes, schools, and businesses, stress on the United States’ deteriorated and aged electric power network is reaching a critical point. Yet emerging wide bandgap-based technologies, leading to higher power density and efficiency, can accelerate the aging and degradation of insulation systems and lead to unexpected failures.

“Because electrical insulation determines the life of an electrical system, whether we are talking about the country’s electric power grid, a computer, or an electric vehicle, it is important for us to find solutions to aging insulation systems,” said Mona Ghassemi, assistant professor in the Bradley Department of Electrical and Computer Engineering.

Replacement of a faulted power system component can take up to a few days, and during that time, the power grid is more prone to blackouts. Blackouts can negatively impact communities and the economy in a significant way. The Northeast blackout that occurred in August 2003, for instance, affected approximately 50 million people in eight U.S. states as well as the Ontario province in Canada, resulting in $6 billion in economic losses in goods and services, said Ghassemi.

“Electrical insulators are materials with a high resistivity that allows them to prevent electric current from flowing where it is not wanted,” Ghassemi said. “An electrical system without insulation is as useful as an automobile without tires. It has all the potential to perform a useful service; however, it is missing a critical component. Therefore, any electrical system must have adequate electrical insulation to perform under normal operating conditions and also provide insulation at the extremes when the system is overstressed.”

Ghassemi will conduct her research in close collaboration with the world’s largest manufacturing companies of power system apparatuses and one of the largest utilities in the United States.

Her NSF CAREER project also integrates an educational component to help train the next generation of high electric field and electrical insulation engineers and researchers, who are needed to maintain the competitive vitality of the U.S. power system and electronics workforce.

The education plan also aims to open the pipeline at the high-school level. Ghassemi will collaborate with the Center for the Enhancement of Engineering Diversity at Virginia Tech on K-12 outreach activities designed to attract women and ethnic minorities to the field of electrical engineering.

A Virginia Tech faculty member since 2017, Ghassemi has also won another award for young faculty this year, the 2020 Air Force Office of Scientific Research Young Investigator (YIP) Program Award. She is only the second faculty member in the Department of Electrical Engineering to receive both the NSF CAREER and DOD YIP award in the same year.

Ghassemi earned her Master of Science and Ph.D. degrees in electrical engineering from the University of Tehran, Iran, in 2007 and 2012, respectively.

Ghassemi is also a senior member of the Institute of Electrical and Electronics Engineers; a registered Professional Engineer in the Province of Ontario, Canada; and an associate editor of IEEE Transactions on Industry Applications, IET High Voltage, and the International Journal of Electrical Engineering Education.