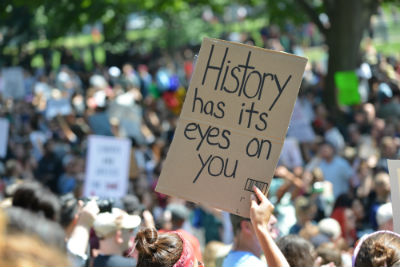 There’s something to the idea you’re seeing bandied about on how we maybe need to address these kinds of things before we go back to playing games.

What we need to address: white coaches who are best tone-deaf on race making millions to run organizations comprised largely of black student-athletes playing for free.

The situation at Penn State has apparently been brewing for some time. It came out this week that a former key contributor, Rasir Bolton, transferred out after the 2018-2019 season after the incident involving the comment about the noose.

Worse, in that matter, is that Bolton reported the incident to his academic advisor, and that it was ultimately brought to the attention of the athletics department, which, incredulously, referred Bolton to a psychologist to help him deal with the coach’s personality type.

The coach didn’t initially apologize, according to Bolton, only doing so this week after Bolton’s family reached out to a reporter after Chambers participated in a forum on race in college athletics, and made comments that appeared to be an effort to boost his record on race issues in his program.

This story has a lot in common with what happened last month at Oklahoma State. A photo appeared on social media featuring Gundy wearing a One America News T-shirt, prompting the team’s star tailback, Chuba Hubbard, to go public with a threat to boycott team activities until “things change.”

Gundy apologized and then appeared in an awkward video with Hubbard, but more awkward was his effort to try to claim that he didn’t know the network’s stance on Black Lives Matter while also claiming to be a big fan of OAN.

Notable in both cases is that there was no action taken until things got out into the public domain.

In the Penn State story, indeed, Bolton transferred out and played this past season at Iowa State, after being granted a waiver by the NCAA, before the issue with Chambers became known publicly.

The apologies and promises to enact change feel more like PR than anything real.

The economics of college athletics rests upon a house of cards of ongoing eternal donations from alums and boosters.

The pressure to make sure things look right is paramount.

But things need to do more than look right.

As the ubiquitous TV commercials that run during college sports broadcasts remind us, 99 percent of the student-athletes go pro in something other than sports.

In the meantime, they’re putting in countless hours in practices, film study, travel and games, at a rate of compensation in the form of scholarships that is pennies on the dollar for the time they put in.

It’s an already exploitative system, made more so by coaches who have to be told to respect basic standards of decency when it comes to race.

We’re well beyond needing to acknowledge the problem, which itself is only a baby step toward addressing what needs to be done to correct for it.