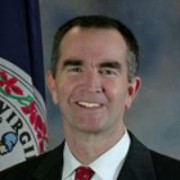 Here are his remarks prepared for delivery at the announcement.

“I want to thank everyone watching from around Virginia and around the country, and I want to thank the many guests who have joined us as we chart a new course in Virginia’s history.

“Today, we’re here to be honest about our past and talk about our future.

“I’m no historian, but I strongly believe that we have to confront where we’ve been, in order to shape where we’re going.

“And in Virginia, for more than 400 years, we have set high ideals about freedom and equality, but we have fallen short of them.

“Some of America’s most hopeful and forward-looking moments happened in this Commonwealth and in this capital city. When Americans first dreamed of life, liberty, and the pursuit of happiness—they dreamed here in the Commonwealth.

“Virginia adopted a Declaration of Rights before the United States declared independence. It said that all are “equally free and independent and have certain inherent rights.” It specifically called out freedom of the press and freedom of religion.

“And in a church on a hill 15 blocks from here, Virginia’s first elected Governor helped launch the American Revolution when he cried, “Give me liberty, or give me death!” That was Patrick Henry, and I now have the job that he once held—72 governors later.

“These are our greatest legacies as Americans. But there’s a whole lot more to the story, because those inspiring words and high ideals did not apply to everyone, not then and not now.

“Because at the bottom of that same hill, one of the country’s largest slave-trading markets was coming to life. A place where Virginians would sell men, women, and children for profit. Americans buying and selling other Americans.

“This is just as much the American story, and it’s one that we are only just now beginning to tell more fully.

“Through 400 years of American history, starting with the enslavement of Africans, through the Civil War, through Jim Crow, and Massive Resistance, and mass incarceration, black oppression has always existed in this country, just in different forms.

“The legacy of racism continues not just in isolated incidents like we saw in Minneapolis a few days ago—and I want to acknowledge that our country will honor the life of George Floyd in a memorial service in about three hours.

“The legacy of racism also continues as part of a system that touches every person and every aspect of our lives, whether we know it or not. But hearts are in different places, and not everyone can see it—or they don’t want to see it.

“When I used to teach ambitious young doctors, I would tell them, “The eyes can’t see what the mind doesn’t know.” That’s true for all of us.

“So, it’s time to acknowledge the reality of institutional racism, even if you can’t see it. Public policies have kept this reality in place for a long time. That’s why we’ve been working so hard to reform criminal justice laws, expand health care access, make it easier to vote, and so much more.

“But symbols matter too, and Virginia has never been willing to deal with symbols. Until now.

“Today, Virginia is home to more Confederate commemorations than any other state. That’s true because generations ago, Virginia made the decision not to celebrate unity, but to honor the cause of division. You’ll see this if you look around Virginia and our capital city.

“The statue of Robert E. Lee is the most prominent. Lee himself didn’t want a monument, but Virginia built one any way. Lee once said, “I think it is wiser not to keep open the sores of war, but to follow the examples of those nations who endeavored to obliterate the marks of civil strife, to commit to oblivion the feelings engendered.” Those are wise words indeed.

“So, what happened? Virginia leaders said, we know better.

“Instead of choosing to heal the wounds of the American civil war, they chose to keep them on display. They launched a new campaign to undo the results of the Civil War by other means.

“They needed a symbol to shore up the cause. And it’s quite a symbol. The Lee statue was built in France, and when it arrived by boat on the James River docks, it took 10,000 citizens—and a whole lot of rope to haul three large crates out into the tobacco field where it would be installed. Some business people put it out in the field, so they could eventually build a housing development around it, and make money. It worked.

“This happened in May 1890, twenty years after Lee died and a generation after the Civil War ended. 150,000 people came out when the statue was unveiled. But from the beginning, there was no secret about what the statue meant. Almost every one of those 150,000 people waved Confederate flags that day.

“John Mitchell was the editor of the Black newspaper, the Richmond Planet, at the time. He wrote, “The emblem of the union had been left behind—a glorification of the lost cause was everywhere.” It was a big day, and more big days followed throughout the old south. And as the statues went up, so did lots of new laws. It was all part of the same campaign.

“Here’s just one example: New laws limited the right to vote. In the years after the Civil War, more than 100,000 African American men were registered to vote in Virginia. But once this campaign took off, that number plummeted by 90 percent, to barely 10,000.

“That worked too. Because the people who wrote these laws knew what they were doing. They wrote other new laws to say that once a statue goes up, it can never come down. They wanted the statues to remain forever—they needed the statues to stay forever, because they helped keep the system in place. That also worked. Those laws ruled for more than a century.

“But voting matters, and elections matter, and laws can be changed. And this year, we changed them. This year, I proposed legislation to let cities and counties decide what to do with monuments in their communities—take them down, move them somewhere else, or add additional context.

“That law takes effect in four weeks, and then local communities will decide. I know Richmond is going to do the right thing.

“But the Lee statue is unique. It’s different from every other statue in Virginia—both in size and in legal status.

“You see, the state owns it, unlike most other statues. That was another part of the plan to keep it up forever. It sits on a 100-foot circle of land, a state-owned island, surrounded by the City of Richmond.

“The whole thing is six stories tall. It towers over homes, businesses, and everyone who lives in Richmond—from elegant Monument Avenue to the public housing neighborhood of Gilpin Court. The statue itself weighs 12 tons, and it sits atop a large pedestal. A pedestal is a place of honor. We put things on pedestals when we want people to look up.

“Think about the message this sends to people coming from around the world to visit the capital city of one of the largest states in the country. Or to young children. What do you say when a six-year-old African American little girl looks you in the eye, and says: What does this big statue mean? Why is it here?

“When a young child looks up and sees something that big and prominent, she knows that it’s important. And when it’s the biggest thing around, it sends a clear message: This is what we value the most. But that’s just not true anymore.

“In Virginia, we no longer preach a false version of history. One that pretends the Civil War was about “state rights” and not the evils of slavery. No one believes that any longer.

“And in 2020, we can no longer honor a system that was based on the buying and selling of enslaved people. In 2020!

“I want us all to tell the little girl the truth. Yes, that statue has been there for a long time. But it was wrong then, and it is wrong now.

“Now, I know some will protest. Some will say, Lee was an honorable man. I know many people will be angry.

“We must take action. So, I am directing the Department of General Services to remove the statue of Robert E. Lee as soon as possible. It will go into storage, and we will work with the community to determine its future.

“Before we turn to the next speakers, I want to acknowledge all the elected officials, scholars, members of our advisory boards, and other guests who here.

“In particular, I want to acknowledge members of the family of Barbara Johns: Mr. Robert Johns and his grandson Mr. Tyrone Mayer, Jr. You all know their family’s story.

“In 1951, a 16-year-old girl, Barbara Johns, stood up and led a protest—a student strike against substandard conditions at Robert Russa Moton High School in Prince Edward County. She pushed and pushed, and two great American attorneys took up her cause. Oliver Hill and Spottswood Robinson filed suit, next door, in the federal courthouse at the bottom of the hill. That case became Brown v. Board of Education, and it eventually threw out segregated schools in the United States of America.

“We’ll hear in just a moment from a few of the people who are making change happen.

“America is once again looking to Virginia to lead. But make no mistake—removing a symbol is important, but it’s only a step.

“It doesn’t mean problems are solved. We still need change in this country. We need healing most of all. But symbols do matter.

“My friends, we all know it’s time. And history will prove that.”