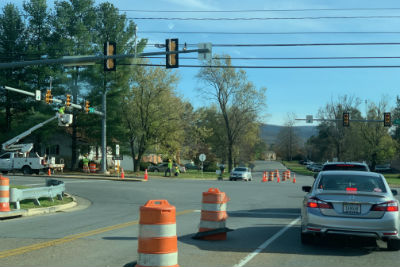 A crew was hard at work installing a pole and traffic light at the intersection of Rosser Avenue and Tiffany Drive in Waynesboro on Thursday.

The pole at the north end of the intersection went down on July 29 due a traffic accident, snarling traffic on the stretch at the opening to the busy commercial area connecting Rosser, Lew Dewitt Boulevard and Interstate 64 to Downtown Waynesboro.

The cost of surveying the intersection and installing a new pole and support beam with lights cost the city $60,000.

The driver of the car that hit the pole, according to Waynesboro Police Department’s Sgt. Fred Smith, sustained minor injuries and was charged with failure to yield the right of way.

The pole was struck after a collision between other vehicles in the intersection.

The intersection is one of nine between Tiffany Drive and Shenandoah Valley Drive that Shaw said the city is working with the Virginia Department of Transportation to develop a plan to improve traffic flow.

The city has applied for VDOT Smart Scale grants to go toward the development of that plan, for which funding could be received within the next year.

With reporting from Rebecca J. Barnabi