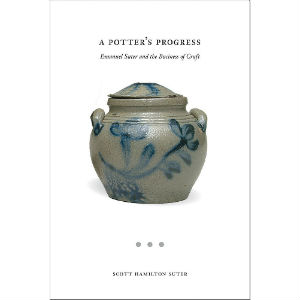 Dr. Scott H. Suter’s new book, A Potter’s Progress: Emanuel Suter and the Business of Craft, examines how one craftsman in the 1800s cultivated the art of pottery and expanded markets across the Shenandoah Valley of Virginia.

“A key takeaway from this book lies in the story of one craftsman’s move from the tradition in which he learned toward a more national, industrial model,” Suter said. “This case study can be applied to other regions as well, but here the focus is on the Shenandoah Valley.”

The idea for the book, published in January 2020 by University of Tennessee Press, originated when Suter was a graduate student at the University of North Carolina at Chapel Hill. One of Suter’s professors had recently published a book on North Carolina potters, and Suter told him about his great-great grandfather. After being encouraged to research the topic, Suter made the concept the major portion of his doctoral dissertation at George Washington University, where he received his Ph.D. in American civilization.

Suter’s research for A Potter’s Progress included information from family members, records in numerous archives and collections and even details from Emanuel Suter’s own diary. His diary included “meticulous descriptions for his ceramic wares, along with glazing recipes and the quotidian details of 19th century business,” according to the University of Tennessee Press catalog. As a farmer, Emanuel Suter incorporated cutting-edge, timesaving equipment into his practice. His innovative, entrepreneurial spirit carried over into his pottery side business. Suter’s book includes nearly two-dozen color images, and a close study of techniques, products, shop organization, marketing and labor of Emanuel Suter’s pottery shops.

“This tightly focused case study of the trials and triumphs of one craftsman as he moved from a cottage industry to a full-scale industrial enterprise—prefiguring the market economy that would characterize the 20th century—serves as a microcosm for examining the American spirit of progress in late 19th century America,” stated the University of Tennessee Press.

Suter has published numerous books, chapters and essays on Southern literature and cultural history. His book Shenandoah Valley Folklife was published in 1999 by University Press of Mississippi. And, along with Cheryl Lyon, he produced two volumes, titled Harrisonburg and Rockingham County, in Arcadia’s “Images of America” series.

Suter has served as a professor of English and American studies at Bridgewater College since 2002. His focus on American culture has included courses on American folklife, American studies, Southern literature, American cultural history and public history. In July 2019, he was named director of the Margaret Grattan Weaver Institute for Regional Culture at Bridgewater. Housed in the college’s Center for Engaged Learning, the institute provides support and resources for the study and advancement of history and culture in the Shenandoah Valley of Virginia. Suter received the college’s Faulty Scholarship Award in 2017 and the college’s Ben and Janice Wade Outstanding Teaching Award in 2019.