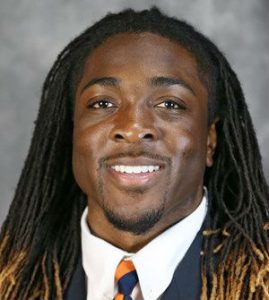 You could see it in the game film from JUCO ball – the athleticism, the arm. But Virginia offensive coordinator Robert Anae concedes that the film didn’t do Bryce Perkins justice.

“What we did not see on the recruiting film is how committed he is to the process. What you don’t see on the film is his ability to lead others in the process. And dang, did he overachieve in that realm. Had no idea that he would be that kind of person, that kind of leader on a team,” Anae said of Perkins, who has led Virginia to a 17-9 record in two seasons as the starting quarterback, and has the Cavaliers in the program’s first New Year’s Six game.

Perkins has come a long way from damaged goods at Arizona State, a year of JUCO ball, then trekking cross-country for his last shot at having an impact in college.

He strapped a long-dormant program to his back along the way, and lifted Virginia Football to new heights.

Perkins is talked about as a dual-threat quarterback, but when you think of dual-threat QBs, you’re thinking of 5’10”, 190-pound guys, not 6’3”, 220-pounders who can outrun you or run through you, depending on the situation.

He’s been asked to do an awful lot in his second season as the starting quarterback at Virginia, which relies on Perkins honestly a bit too much in the running game.

Accounting for sacks, Perkins had 176 rushing attempts in 2019, 65 more than the starting tailback, sophomore Wayne Taulapapa, and he led the team in rushing yards by a mile (745, with 11 rushing TDs this season).

This while also being asked to do more in the passing game – Perkins has thrown the ball 456 times in 13 games this season; he had 349 attempts in 13 games in his first season as the starter, in 2018.

This would seem to make Virginia easy to defend – basically, stop Perkins, you stop Virginia.

But that has ended up being something more easily said than it is done for Virginia opponents.

Over the Cavaliers’ most recent five games, Virginia has averaged 461.6 yards and 36.4 points per game, as Perkins has been at his best – throwing for 298.0 yards per game, running for 94.0 yards per game, and accounting for 15 TDs (nine passing, six rushing) over that stretch.

“I think this guy is really special in the sense that one, if you watch from the continuity tape, I think he’s gotten better every game this year. The end of the year probably averaging 300 yards a game passing. He’s obviously athletic and can make things happen,” said Florida defensive coordinator Todd Grantham, who explained what Perkins’ athleticism does to opponents’ defensive schemes.

“He creates an 11-on-11 game because of the style in which they play, which what that does is creates an extra gap defensively for you to feel, because like if the quarterback is a non-runner or a non-factor, then it’s really 11-on-10 and you can play with an extra guy in coverage and things like that, whereas when it’s 11-on-11, you have an extra gap to fill, so you’ve got to play it a little differently,” Grantham said.

“You’ve also got to understand relative to the call how you rush, because there’s six rush lanes so if you have four guys rushing, you’ve got to collapse the pocket outside in to keep the guy in the pocket. And then the thing on the pass plays is as you distribute because the guys are going down the field, a guy that is athletic like that, if he makes a guy miss and can get out in space, now you have an athlete with the ball in his hand in space. So that becomes an issue.”

It would seem that a talent like Perkins would be in demand with the NFL draft looming next spring, but, surprisingly, not so much, not now, anyway.

None of the pre-draft analyses that I was able to punch up listed Perkins among the top 20 prospects heading into the 2020 draft. The most helpful observations have him getting a shot to impress scouts in individual workout and combine situations to maybe be a late-round pick.

The play of surprise NFL MVP candidate Lamar Jackson, another big, athletic dual-threat quarterback whose stock was undervalued going into his NFL draft year, could be a positive for Perkins going forward.

“I feel like my ceiling is high. I haven’t reached my potential yet. And how the NFL is shifting, there’s room and there’s a place for my style of play. And I think it can be very effective, and Lamar Jackson, amongst others, he’s just a more recent, has been very influential on the type of player, the type of system that teams run. It’s going to give a lot of guys chances, and I feel like I fit right into that,” Perkins said.