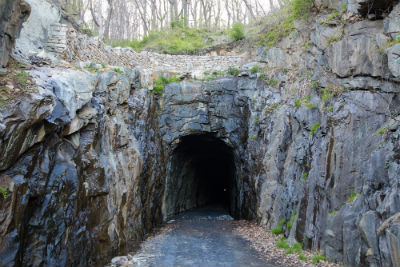 The effort dating back to 2001 to develop a trail system out of a 4,700-foot abandoned train tunnel at Rockfish Gap in Nelson County has finally come to fruition.

Nelson County announced today the opening of the Claudius Crozet Blue Ridge Tunnel Trail system, which will feature two access points – a 12-spot parking lot can be found at 215 Afton Depot Lane and a  trailhead situated just east of Waynesboro at 483 Three Notched Mountain Highway that and has 25 parking spaces and two oversized areas for small buses.

At just over 2.25 miles one way, the crushed stone path offers the explorer a chance to travel back in time to touch the original pin scars from the 1850s.

The trail will be open from sunrise to sunset, said Claire Richardson, the director of Nelson County Parks and Recreation.

Visitors are required to follow COVID-19 protocols, including six-foot physical distancing, with no large groups.

“We encourage face masks and recommend returning at a later date if the parking lots are full. Please be cognizant inside the tunnel of other visitors and beware of uneven ground,” Richardson said.

The tunnel was constructed between 1850 and 1858 by Claudius Crozet, designer and chief engineer on the project and Irish immigrant laborers. The Blue Ridge Tunnel opened to railroad traffic on April 13, 1858. At the time, it was the longest railroad tunnel in North America.

In 1944, the Chesapeake and Ohio Railway replaced the 86-year-old Blue Ridge Tunnel with an adjacent tunnel that could accommodate larger locomotives. Somewhat parallel to the old passage, the newer tunnel is still in daily operation; the old Blue Ridge Tunnel has not hosted rail traffic since then.

The foundation includes representatives from the counties of Nelson, Albemarle, and Augusta and the City of Waynesboro. Its mission is to support the restoration, reuse, and historical interpretation of the Claudius Crozet Blue Ridge Tunnel as a community landmark and outstanding recreational and educational resource.

The majority of the funding for developing the Claudius Crozet Blue Ridge Tunnel Trail system came from federal and state transportation grants and sources.

The result of the efforts is a tunnel trail system in an environment that holds year-round temperatures of 50 degrees. Traveling through the long, dark tunnel will be a stirring experience for a variety of visitors from across the Commonwealth and beyond: hikers and cyclists of every level, wildlife watchers, history enthusiasts, railroad buffs, heritage tourists, school children on field trips, and nearby residents.

Currently there are no plans to light the tunnel, so walkers and bikers are urged to bring headlamps and/or flashlights to aid their vision.

The tunnel is also strategically located at the convergence of the southern entrance of Shenandoah National Park’s Skyline Drive, the northern entrance of the Blue Ridge Parkway, the Appalachian Trail, and U. S. Bicycle Route 76, boasting more than 6 million travelers annually. Both Interstate 64 and U. S. 250 cross over the tunnel at Rockfish Gap.

“Thanks to Nelson County Administrator Steve Carter for his vision, leadership, and perseverance to see this project through nineteen years of collaboration and partnership development,” Richardson said. “The tunnel is an important recreational asset to Nelson County and we look forward to sharing it with visitors.”