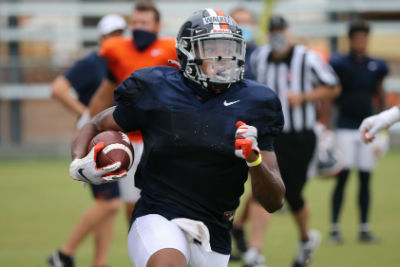 The NCAA, after denying eligibility to UVA junior tailback Ronnie Walker, who had transferred from Indiana in the spring, then dithering for several weeks, is now declaring the Hopewell native A-OK.

Unfair to the kid, who had to miss the first three games of his junior season, but great news for the Virginia offense, which was razor thin in terms of depth at the tailback position.

“We are excited for Ronnie that his request for a waiver to play this season was approved and we look forward to having him compete starting this weekend,” UVA coach Bronco Mendenhall said.

Mendenhall is probably just as happy to not have to keep answering questions from reporters about Walker’s appeal, since it’s not like he’d have any special insight as to why the NCAA was being hard on Walker while approving eligibility requests for scores of other student-athletes in the wake of the upheaval that the COVID-19 response has wreaked on the athletics marketplace.

It’s not at question what Walker will do to the depth in the backfield. A two-time all-state player at Hopewell High School, Walker ran for 2,011 yards and 25 touchdowns as a junior in 2016, then added 1,344 yards and 19 TDs as a senior in 2017 while leading his team to a state title.

He never broke through the depth chart in his two years at IU, running for 221 yards on 59 carries.