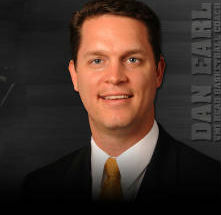 Earl comes to VMI from the United States Naval Academy where he was Associate Head Coach since the 2011-12 season. His duties included serving as recruiting director, scheduling, scouting of opponents, game preparation and player development.

While at Navy, Earl used his experience as a dynamic recruiter to draw several talented student-athletes to Annapolis that were instrumental in the Midshipmen doubling conference wins in each of the first four seasons under head coach Ed DeChellis. Navy posted eight Patriot League wins in 2014-15 and defeated rival Army three times which included a conference tournament victory over the Cadets.

Earl directed the Navy offensive sets and played a vital role in increasing scoring output of key offensive players. On the defensive side, Navy ranked 57th in the country in scoring defense in 2013-14 and had the second lowest turnover total in school history.

Earl becomes the 28th head coach in VMI program history that dates back to 1908-09.

“We started this process committed to several things,” said Diles. “First, to identify a Head Coach that would represent VMI with dignity and understand, and embrace, the unique mission of the Institute.  Second, to find someone with high intelligence, and previous experiences that have served as the appropriate foundation for assuming this leadership opportunity.  And finally, to determine who best developed and communicated a plan for advancing VMI basketball.  Coach Earl quickly emerged as our top candidate.”

“It is truly an honor to be selected as Head Basketball Coach at VMI,” said Earl “I want to sincerely thank General Peay and Dr. Diles and the VMI administration for giving me this opportunity. I look forward to working with the team and to doing our part to teach young men on the court the great values that reflect the mission of the Virginia Military Institute. My wife Sheila and my two girls, Mila and Alyssa, can’t wait to become part of the VMI and Lexington community.”

Earl starred on the basketball court at Penn State where he helped the Nittany Lions to one of the most prolific winning periods in the mid-90’s before spending six years from 2006-11 on the staff at Penn State as an assistant coach.

While coaching at his alma mater, Earl helped the Nittany Lions to a NCAA Tournament berth in 2011 –the program’s first in 10 years – and the 2009 NIT Championship squad that posted wins over national powers Florida, Notre Dame, and Baylor. The 2009 Penn State team won a school record 27 games and the program also attained an NIT berth in 2007.

As a starting point guard under head coach Bruce Parkhill and then assistant coach Ed DeChellis, Earl battled injuries throughout his career but finished six years later with 1,256 points (15th all-time at the time), 574 assists (no. 2 all time), 194 career three-pointers (7th all-time) and 491 3-point attempts (7th all-time). He totaled two of the top season school marks in assists. During his college playing career, Earl helped Penn State to perhaps the best five-year stretch in school history as the Nittany Lions posted a record of 73-46 that including a 48-13 home mark. He served as team captain three times and helped Penn State to the 1995 NIT and a 1996 NCAA Tournament appearance from a squad that went 21-7 and earned a top 10 national ranking. Earl earned All-Big Ten honors twice and was a two-time Academic All-American.

Earl also co-owned and operated Next Level Basketball Camps from 2001-05 which conducted camps and clinics in New Jersey.

The Earl family has deep roots in basketball as father Denny was a starting forward for Rutgers in the mid 60’s where he played under head coach Bill Foster and alongside the late Jim Valvano. Dan’s younger brother, Brian, started for Princeton from 1996-99 and helped the Tigers to 95 wins – the most of any player in school history. Brian currently serves as an assistant coach at Princeton.

Dan and his wife, Shelia, were married in the summer of 2008 and have two daughters, Mila and Alyssa.

“Dan Earl’s playing credentials at Penn State, in the NBA and in Europe are outstanding,” said Diles. “Earning Academic All-America honors underscores his experience in balancing the challenges of competing at the highest athletic level while excelling academically.   His work as an Assistant Coach, and later earning promotion to Associate Head Coach, represent continued achievement at the highest levels.  Finally, after meeting Dan, his wife Sheila and their two young daughters, it became clear to me that VMI has found the ideal coach to recruit, coach, and support the personal growth of our cadet athletes on our basketball team.  Dan possesses a dignity that connects perfectly with the high standards of VMI.”