Natural benefits of CBD may be effective for ADHD treatment 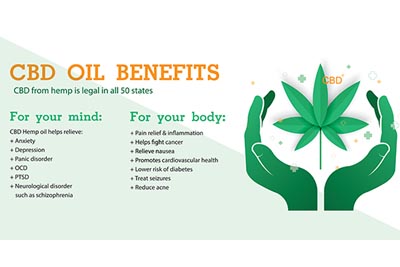 CBD and ADHD are both acronyms highly prevalent in the medical world. Attention deficit hyperactivity disorder or ADHD is one of the most common mental conditions affecting child-aged children and adults. In fact, the American Psychiatric Association (APA) notes nearly 8.4 percent of children and 2.5 percent of adults have ADHD. So with scientific research increasing on the benefits of CBD, what are we learning about how CBD and ADHD relate? Early results show that the natural benefits of CBD may be able to help the symptoms of the widespread disorder. Here we’ll cover just how CBD for ADHD can be effective, and the evidence supporting what many ADHD sufferers have learned on their own.

To understand how CBD for ADHD can be helpful, first, we need to understand how CBD works. CBD interacts with and effects receptors found in the body’s endocannabinoid system (ECS).  The ECS is responsible for sending messages to control or regulate almost every function in the body. Through this relationship, CBD is able to provide its natural benefits to a wide-range of areas and systems throughout the body.

The exact source or cause of ADHD is unknown, although it’s safe to say it may be genetic. The APA estimates that 3 out of 4 suffering from ADHD, have a relative who shares the condition. While there is no lab test for the disorder it’s often discovered in school-age children due to symptoms arising in classroom style settings.

There are two types of ADHD that should be noted. The first being ‘inattentive’ and the second as ‘hyperactive/impulsive’. Both varieties are diagnosable by the display of different signs or symptoms. They include:

So, why is this information important? The symptoms or side effects all induce or relate to anxiety and feeling on edge. Which CBD is showing to help. Even though there is little research on the direct treatment of ADHD with CBD, its interaction with common neurotransmitters and soothing of symptoms is becoming highly more notable.

Now going back to how CBD works…let’s move on to how the natural cannabinoid acts to relieve the severity of these common ADHD symptoms.

The correlation between most of ADHD’s symptoms include focus issues, motivation, movement, memory and mental awareness, like attention. These functions are also all related to the neurotransmitter, dopamine. Varying levels of dopamine affect how well these functions work. Which is why researchers are studying levels of dopamine more closely in people who suffer from ADHD.

But how does this relate to CBD? CBD affects this system of transporters and neurotransmitters due to its interaction with the endocannabinoid system. As for dopamine, CBD interacts with its receptors to regulate levels and stimulates the production for increased levels. This helps to positively regulate focus, concentration and mental awareness for ADHD patients.

To show effectiveness of CBD and dopamine, we can reference standard ADHD medications like Adderall. Adderall also works by increasing dopamine in those who take it, conversely lengthening their attention span or focus.

Early research into the causes of ADHD is also showing a correlation to the activity of gamma-Aminobutyric acid or, GABA. Like dopamine, low GABA levels are often found in those diagnosed with ADHD. And not surprisingly, CBD works internally to stimulate and support GABA production and activity.

CBD binds directly to GABA receptors which helps support the production and actions of the acid. Which includes being neurologically anticonvulsant and anxiolytic in nature. Anxiolytic is to reduce anxiety, and anticonvulsant is just how it sounds – it works to reduce convulsions, often seen in epileptic fits. Or similar to the fidgeting and tapping, found in ADHD patients.

Synthetic drugs like general anesthetics, barbiturates and benzodiazepines enact their own specific effects by binding to GABA receptors and effecting their activity, too. Further proving CBD’s similarities to commonly prescribed medications.

Lastly, ADHD development is also associated with decreased levels of the neurotransmitters norepinephrine and serotonin. Research is showing that not only does CBD promote 5HT1A, the most influential serotonin receptor but also reacts positively with norepinephrine, too. Common medications for the treatment of anxiety disorders, like ADHD are serotonin–norepinephrine reuptake inhibitors (SNRI’s). Just another example of CBD’s natural effects mimicking those of pharmaceutical options.

CBD for ADHD: Soothing side effects

Speaking of pharmaceutical options, most patients diagnosed with ADHD are prescribed either a stimulant, or non-stimulant prescription to curb symptoms and side-effects of the disorder. As you know, many prescriptions come with a hefty list of side-effects that can negatively affect those on them.

Anxiety and insomnia can be common with those prescribed stimulant types of medications, like Ritalin or Adderall. Many ADHD sufferers are turning to CBD to naturally ease feeling anxious and help promote a restful sleep. Another indirect benefit of CBD for those with ADHD is curbing possible addiction tendencies. Adults with ADHD can be more inclined towards addictive behavior, like substance abuse. With CBD’s positive interaction with opioid receptors throughout the brain, it’s showing promise in blocking addictions, and reducing the severity of withdrawal.

Is CBD successful at treating ADHD?

With the gained knowledge of how CBD works internally to promote it’s positive effects, you can see why researchers are continuing to investigate its efficacy for ADHD. While studies are increasing into the direct relationship of CBD and the condition, early results are showing promise in relieving the symptoms and side-effects of the common disorder. As a reminder, always consult your physician in regards to any medical changes or additions, like implementing CBD into your routines. And, of course…when you’re in need of the highest quality CBD products in full spectrum, broad spectrum or isolate form...look no further, than Nature’s Pure.